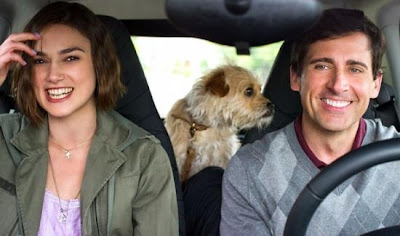 If nothing else, watching Seeking a Friend for the End of the World gave me a renewed appreciation for Last Night, the low key "end of the world" film from 1999 which covers some of the same ground. Making an even remotely funny movie out of such relentlessly depressing subject matter isn't easy. Lorene Scarfaria's Seeking a Friend for the End of the World comes close to making it work, but ultimately just can't find the right balance of tones. Of course, it doesn't help that the relationship that acts as the story's focal point is at times sweet but mostly just weird and unbelievable.

Earth is doomed. As the film opens the planet's only hope for survival has just failed and humanity is struggling to come to terms with the fact that an asteroid will hit in three weeks time and completely destroy life on the planet. As the film's protagonist, Dodge (Steve Carell), listens to this news on the radio, his wife suddenly takes off, disappearing from his life forever and giving him one more thing to be depressed about. A week or so later he meets his neighbor, Penny (Keira Knightley), herself desperately depressed about the fact that she missed the very last plane she could have taken to her native England and will now die an ocean away from her family. As it turns out, Penny has been accidentally getting Dodge's mail for years and never found the time to deliver it to him. Once he gets it, he discovers that his first love, for whom he's continued to carry a torch, wrote him a letter in which she declared that he's the love of her life. This news, coupled with a growing riot in the streets outside, prompts Dodge to take off in search of her. After he reveals that he knows someone who has a plane, Penny agrees to help him reach his destination in the hope that it will result in her being able to reunite with her family.

The two (plus a dog that Dodge somehow inherits during a drunken evening when he passes out in a park) set off on a road trip fraught with detours and minor disasters. They end up hitching a ride with a suicidal man who has hired a hitman to kill him, they get pulled over and detained by a cop who is, for some reason, still doing his job, they almost end up in the middle of an orgy in a TGI Friday's (where, again, people are still doing their jobs, albeit while stoned), and in the midst of confiding in each other about their lives and their regrets, they find that they've fallen in love. For Dodge, this represents a very particular quandary. The whole trip was inspired by his desire to be with someone he loves at the end of the world and now that person is Penny. Penny, meanwhile, has told him that she doesn't want to die the way that she lived, blowing off her family in favor of being with some guy who turns out not to matter. So does he follow through on his promise to try to help Penny get back to England, or does he try to keep her with him?

This question is easily answerable if you've ever seen a movie before (and what happens after that is also easily guessed at), and it's coded as a sweet moment. In a way it is (even though it completely robs Penny of any kind of agency over her own life or destiny), but in another, more prominent way, it just doesn't work the way that it's supposed to because Dodge and Penny aren't believable as a romantic pairing. The characters are fine individually and believable as "crisis situation" type friends, but Carell and Knightley have no romantic chemistry together, a fact which is only heightened by the age difference between them. Older actor/younger actress pairings can work in movies (and are the basis for, like, 70% of all movies made), but this particular pairing is never able to transcend that generational divide. During the big romantic moments you aren't thinking "they're so in love," but rather, "Hey Keira, do you need me to call someone? Because your dad is acting really creepy."

Seeking a Friend for the End of the World fails as a romance, but it very nearly succeeds as a comedy. There are a lot of funny moments in the film, largely courtesy of Carell's ability to make what is awkward and uncomfortable funny. For much of the film, Scarfaria is right there with him, hitting the same notes, but too often ends up going too far into the realm of hopelessness and despair to be able to pull it back into comedy. There is no deus ex machina, no last minute reprieve. The world is going to end and there's nothing that they can do except make the most of what's left. It's sad - and that's okay, except that the film presents itself as a comedy but never manages to be as funny as it is tragic.
Posted by Norma Desmond at 8:00 AM