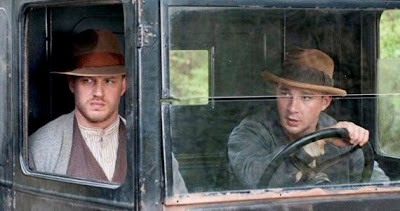 John Hillcoat's Lawless is a competent (albeit blood soaked) genre film that stumbles somewhat whenever it makes a play at being a prestige picture. It takes itself very, very seriously and it aims higher than it can hit, but even though it has some fairly prominent flaws, it is entertaining nevertheless. If nothing else, it makes for a nice medium between the summer popcorn fare and the fall's slate of potential Oscar contenders.

Based on Matt Bondurant's novel The Wettest County in the World, which is itself based on Bondurant family legends, and set during the Prohibition era, the film follows the three Bondurant brothers - Forrest (Tom Hardy), Howard (Jason Clarke) and Jack (Shia LeBeouf) - whose home in Franklin County, Virginia is called "the wettest county in the world" due to the fact that everyone in it is involved in bootlegging. The degree of illegal activity has caught the notice of the authorities, who send in Special Agent Rakes (Guy Pearce), a brutal Chicago transplant, to clean things up (or, at the very least, muscle in on the action).

As all the other bootleggers in the county fall in line with Rakes' intimidation tactics, the Bondurant brothers refuse to bow to pressure, as a result of which they find themselves the target of some of Rakes' most vicious attacks. Rakes beats Jack to a pulp and brings in a pair of Chicago gangsters who get the drop on Forrest and leave him for dead and rape Maggie (Jessica Chastain), the waitress at the restaurant that acts as the front for the Bondurant's bootlegging. As Rakes continues to turn up the pressure, an all out war is waged between the government and the Bondurants - one in which several people die in extraordinarily violent fashion.

One of the problems with Lawless is that it doesn't understand that it doesn't really have any "heroes." One of the things that makes the classic gangster movies so enduring is that they weren't afraid to portray their loathsome protagonists as the villains. Here we're presented with characters who do a lot of bad things, but are given folk hero treatment. Yes, it's true that the characters they're inflicting violence on are bad, but that, in and of itself, does not make them "good" or "heroic." Movies don't have to be about "good" characters in order to be good - some of the best movies ever made are about bad characters - but they have to either demonstrate a firmer understanding that their characters aren't admirable, or more successfully skew the moral compass so that you aren't so taken aback by the thought that you're meant to root for a coldblooded killer - and Lawless does neither.

This, however, isn't the film's biggest problem. The biggest problem is that it makes LeBeouf - an actor whose success oddly seems to be in direct proportion to his lack of charisma - the focus of the story. Jack, as the youngest brother desperate to prove himself, sounds compelling on paper but in practice the brother we really want to know more about is the strong, silent, and seemingly invincible Forrest, and the relationship that we want to know more about is the one between Forrest and Maggie, two battle hardened veterans with the scars to prove it, rather than the nascent flirtation between Jack and Bertha (Mia Wasikowska, wasted in a nothing role), the daughter of a local preacher.

Those issues aside, Lawless is actually a pretty decent film, one which effectively mixes beautiful period detail with absolutely brutal violence. Hardy and Chastain deliver solid performances that leave you wanting more, and Pearce makes for a good villain, even though everything about Rakes is so extreme that he sometimes veers into the realm of caricature and seems out of place amongst the realism of the rest of the production. All things being equal, however, Lawless rests comfortably in that sweet spot between the highbrow and the lowbrow and makes for a nice late summer diversion.
Posted by Norma Desmond at 8:00 AM

smh...leave it to shia to bring the film down.