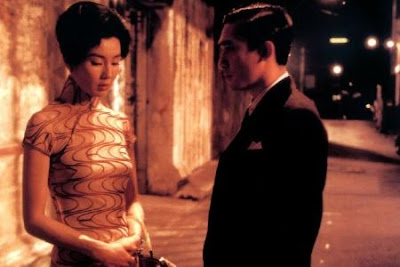 Sometimes what doesn't happen is more important than what does. Nothing ever happens between the would-be lovers in Wong Kar-wai's In The Mood For Love - though, in another sense, everything happens and the relationship becomes the most definitive of both their lives. A beautiful (albeit very bittersweet) love story, In The Mood For Love is easily one of the best films of this still nascent century.

Set in 1962, In The Mood For Love centres on two new neighbors: Chow (Tony Leung) and Su (Maggie Cheung). Both are married and both, more often than not, find themselves alone (Su's husband travels frequently on business and Chow's wife often works overtime shifts). Both begin to have suspicions about their respective spouse's fidelity and awareness slowly dawns on them that their spouses are having an affair. Having come to terms with this, the two develop a friendship and try to understand the affair by retracing its origins.

In long conversations and while taking long walks, the two attempt to recreate the way they believe the affair might have begun, with Chow playing the role of Su's husband and Su playing the role of Chow's wife. Inevitably Chow and Su begin to fall in love, though they keep their relationship chaste because if they were to succumb to their newfound feelings they would be "no better" than their spouses - though they would, perhaps, be happier. Neither can bring themselves to make a move, each convinced of the other's resolve to keep the relationship chaste, until the point comes where a move must be made. Chow has the opportunity to leave Hong Kong for a job in Singapore and asks Su to join him - but, of course, if things were that easy, the pair wouldn't be quite so tragic.

In The Mood For Love moves slowly and sensually, growing in intensity as the stakes become increasingly high. Both Chow and Su are tentative, careful - when they confide to each other about their suspicion that his wife and her husband are having an affair, the conversation progresses very slowly, with each reading between the lines as they try to determine what the other knows. Chow comments on Su's purse, which her husband bought for her abroad, stating that he'd like to get one for his wife. Su admires Chow's tie and notes that her husband has one just like it - one he claims was a gift from his boss. Chow admits that his wife already has a purse like Su's. She already knows; she's seen it. In a moment an intimacy is firmly established between them, one which they guilty protect for the duration of the film, acting like the illicit lovers that they aren't.

In The Mood For Love is very much a film about its characters, but it is also a film about, well, mood. It's about a moment in time that is allowed to slip away and what lingers afterwards. It's a visually glorious movie that practically floats its way across the screen, completely enrapturing the viewer. The film was followed by 2046, a loose sequel as yet unseen by me. Having now seen In The Mood For Love, the follow-up rockets right to the top of my "to see" list.
Posted by Norma Desmond at 8:00 AM

I enjoyed your beautifully written review. I'd never heard of this movie and it sounds excellent. I love films explore characters and relationships deeply. I'm adding this to my list.