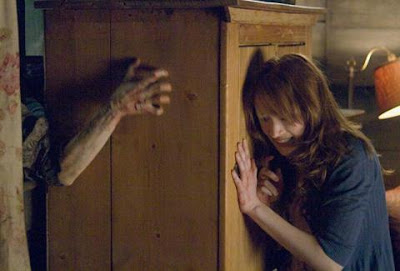 Horror is an interesting genre because it is so often dismissed by people as a "lesser" art form and yet films in the horror genre are amongst the most analyzed and debated ever made. The Cabin in the Woods is both a horror film in its own right and an extended analysis of the genre as a whole - as well as an analysis of viewership of the genre. Guided by the hand of Joss Whedon, The Cabin in the Woods is a sharp, self-referential film - although, perhaps, not quite as clever as it thinks it is.

The premise is familiar. Five college students - Dana (Kristen Connolly), Curt (Chris Hemsworth), Jules (Anna Hutchison), Holden (Jesse Williams), and Marty (Fran Kranz) - head out to a remote cabin for a vacation, ignoring ominous signs such as the creepy gas station attendant they meet along the way. Unbeknownst to them they're being watched, their vacation having been engineered for nefarious purposes by an unnamed agency tasked with ensuring that the human sacrifices necessary to keep the long dormant Gods at bay are completed. Gary (Richard Jenkins) and Steve (Bradley Whitford) are the technicians overseeing this particular operation, observing the students via hidden cameras and ensuring that all the elements are in place to force them to conform with horror movie conventions.

After arriving at the cabin, the five venture down into the cellar, where each finds him or herself drawn to an object, not knowing that one of those things will determine what horror they will face. Settling on a diary, Dana accidentally triggers the rise of a family of zombies who will attempt to tear their way through the group of friends. As one after the other falls to zombie attack, the technicians watch and make sure that things proceed in the proper order and, in particular, that the virginal Dana is the last to die. After Marty shocks the technicians by turning up alive after his own zombie attack, he and Dana discover what is literally going on beneath the surface and learn that in unless the death ritual can be completed, the entire world will be destroyed.

Written by Whedon and Drew Goddard (who also directs), The Cabin in the Woods does a lot of winking at the horror genre, hitting various cliches and acknowledging the fact that many of those cliches only work because the characters have to be reduced to idiocy, while also exploiting them for its own purposes. In some ways, it's a horror movie for people who don't like horror movies, people who think that inclusion in the genre automatically indicates lesser quality; but in other ways it's a horror movie for people who love the genre and are frustrated by the fact that the mass of cheap, bad product reflects badly on films that are genuinely good. It isn't particularly scary, but it's funny and fairly clever, even if not quite as clever as it seems to think it is.
Posted by Norma Desmond at 8:00 AM