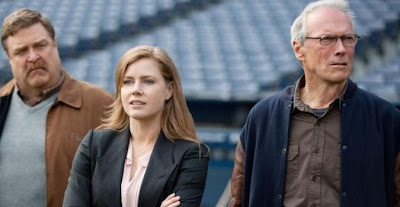 When a film is described as a "feel good movie," that's usually shorthand for a blandly entertaining piece of work that goes so far out of its way to be inoffensive and unchallenging that it is consumed and then instantly forgotten. This isn't necessarily fair, which is why I'm loath to use the term to describe Trouble with the Curve, even though I can't think of a term that's more appropriate. The film, the debut feature of Clint Eastwood's long time Assistant Director Robert Lorenz, is certainly far from a masterpiece, but it's the kind of solidly crafted, smoothly moving film that doesn't often get its due these days. It may not aim very high, but it hits every target it aims for, and does so in a charming and effective way.

Eastwood stars as Gus Lobel, a scout for the Atlanta Braves whose advanced age and unwillingness to rely blindly on Moneyball-esque stats and computer technology has put him at odds with the higher ups, particularly Phillip (Matthew Lillard), who is eager to push Gus out once and for all. Gus is saved for the moment by another executive, Pete (John Goodman), but they both know that he's on thin ice. Part of the difficulty Gus faces in continuing his job is that he's losing his sight, a fact which he hides from as many people as possible while he tries to find ways to make up for the deficiency. To that end Pete talks Gus' daughter, Mickey (Amy Adams) into tagging along with Gus on a scouting trip, something Mickey is reluctant to do as she's on the verge of making partner at her law firm. She ultimately agrees to take a few days to travel with Gus, not that he's particularly grateful or welcoming of her presence.

Gus' assignment is to follow Bo Gentry (Joe Massingill), a minor league player that the Braves desperately want to sign in the draft. Other scouts are watching Gentry as well, including Johnny (Justin Timberlake), a former player who was himself once scouted by Gus. That Mickey and Johnny find themselves drawn to each other is inevitable, as is the fact that Mickey and Gus will have several angry confrontations centering around their shared past or, rather, around the fact that their past hasn't much been shared at all. Mickey, motherless since the age of 6, struggles with feelings of abandonment, having been sent off to live with relatives and then boarding school while growing up, while Gus, not one for words in the best of circumstances, is determined to say as little as possible by way of explanation. That it all works out in the end is a foregone conclusion, but what the film lacks in narrative surprises (and though it ties things up a little inelegantly), it makes up for in its keenly observed characters and the perfectly calibrated performances of its actors.

Eastwood, no stranger to gruff characters who keep their feelings close to the vest, delivers a restrained but not unemotional performance. His relationship with Mickey is complicated, defined for him by guilt that he can never let go, and by pride that he's never felt able to express. For all the time he spends telling Mickey that he doesn't need her around, Eastwood finds twice as many small ways to express that Gus wants her around but can't find a way to say as much. It's a solid performance admirably free of vanity and nicely complimented by that of Adams, whose role provides her with an opportunity to mix the nice girl spunkiness that has defined many of her previous roles, with a degree of toughness that she only rarely gets to display. On paper the role sounds deceptively easy - she's just "the girl" - but Adams provides the story with its emotional centre and acts as the narrative's anchor. Her performance is engaging and compelling and resonates more deeply than one might expect from a story so simple.

Written by Randy Brown, Trouble with the Curve has a few flaws, most notably with respect to the "big reveal" near the end which feels a bit clunky and underdeveloped, but all in all, it's a finely crafted piece of work. It finds a nice balance between the main story which centres on Gus and Mickey, and the smaller stories that surround it, adding a bit of color to the piece. It never pushes too hard, content to let the actors set the tone, and proceeds at a gentle, but never stodgy, pace. It's not a great movie, but it's definitely a good one and if Eastwood and Adams end up amongst Oscar's Best Actor and Actress nominees, I wouldn't be the least bit surprised.
Posted by Norma Desmond at 8:00 AM