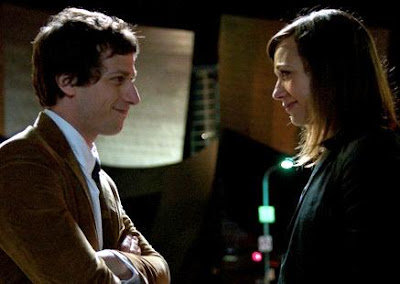 Celeste and Jesse Forever is like the anti-romantic comedy, abandoning the beginning of the love story in favor of the end. Starring (and co-written by) Rashida Jones, the film is about two people learning to redefine themselves outside of the relationship which was once the centre of their universe - a sometimes funny, often painful process that brings out both the best and the worst in them. Though the film makes a few missteps, it's a great effort from all involved.

The film begins with Celeste (Jones) and Jesse (Andy Samberg) closing in on the sixth month of their separation. They still spend every day together and Jesse holds out hope that they might work things out, but Celeste has long since reached the conclusion that Jesse isn't going to be the person she needs, that the disparity between her success and ambition and his own lack of both is too much for them to overcome. She's done with the relationship, but not quite ready to let go of it and move on, which is why it's up to Jesse to finally make the move. It happens when he begins dating Veronica (Rebecca Dayan), a woman with whom he had a one night stand three months earlier, which he learns has resulted in pregnancy.

As Celeste struggles to deal with Jesse's new reality - and, perhaps, the reality that Jesse is going to move on before she does - she also finds herself dealing with potential professional disaster: the branding company she runs with her self-appointed sassy gay friend, Scott (Elijah Wood) has been hired to work on the new album of Kesha-esque pop star Riley Banks (Emma Roberts), and the cover art they've designed and released inadvertently contains an image which resembles a sex act. Celeste falls into a depression, drinks a lot, smokes a lot of pot, and makes a fool of herself on several occasions (and delivers one of the most awkward wedding toasts ever) as she struggles to figure out how (and if) she can still have Jesse in her life.

Jones has been a steadily working actress for a while now but has never before had a chance to show she can carry a film. She's an engaging screen presence who can pull off both the humor of the story (especially the humor of the "cringe inducing" variety) and the drama, making Celeste a character who, while not necessarily always likeable, is certainly believable. Since the story is told from Celeste's point of view, Samberg has less to do but he's a surprisingly effective dramatic actor and he and Jones play well off of each other.

While the film coasts along largely on the skill of its cast, it does suffer somewhat from its shapeless narrative. There are subplots that don't really go anywhere (the whole pop star plot feels like nothing more than a missed opportunity for satire) and too many scenes that feel like echoes of earlier scenes from the movie. Though the running time is only 92 minutes, it still feels like it could use a bit of a trim or, at the very least, a tighter sense of focus. Still, Celeste and Jesse has strengths that far outweigh its weaknesses and, hopefully, will inspire more prominent roles for Jones in the future.
Posted by Norma Desmond at 8:00 AM