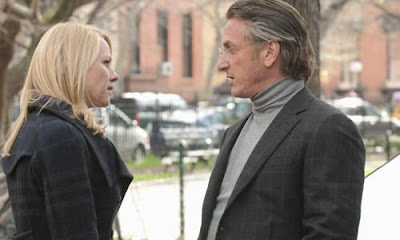 How you respond to Fair Game may ultimately depend on the politics that you bring into it (and probably on how tired you are of narratives centering on the war on terror). Likely, it's a film that can do little more than preach to the choir, but as a member of the choir I have to say that I liked it quite a bit. It's a solid political thriller in the tradition of All The President's Men with two absolutely fantastic performances at its centre.

Based on the books Fair Game by Valerie Plame and Politics of Truth written by her spouse, Joseph Wilson, the film details the upheaval and chaos of Plame and Wilson's lives following the very public revelation of Plame's work for the CIA. The story begins with rumors of a sale of uranium to Iraq by Niger. Because Wilson (Sean Penn) once held a diplomatic position in Niger, Plame (Naomi Watts) suggests that he might prove helpful in investigating the claims and he embarks on a fact finding mission. He returns certain that there's no possible way that the rumors are true, both because of politics (the millions of dollars in aid that has been given to the country by the US) and because of logistics (that much uranium would be difficult, if not impossible, to sneak out of the country). However, a narrative has already started to be developed by the White House to justify going to war and Wilson's conclusions are ignored and the information he's gathered is manipulated to support their intentions.

Wilson writes an op-ed for The New York Times revealing that the intelligence being relied upon is wrong, which results in Plame's name and occupation being leaked to the press in retaliation. Her career in shambles and her work diminished by the press, feeling guilty about the contacts around the world who may now be in danger, and fearful for the safety of her family, Plame's life begins to spiral and her marriage looks to be a casualty. Wilson wants to fight, Plame wants to lay low - they are fundamentally at odds over how to deal with the situation and the film is as much about how their marriage almost failed as it is about the scandal itself.

Wilson and Plame are not perfect heroes but their flaws are what makes them such fascinating protagonists. Wilson is an extremely aggressive character who, even when you agree with what he's saying, sometimes seems like a total jackass (in this way he's perhaps the closest Penn will ever get to playing himself in a film). He's a man whose greatest strength - his fierce intelligence - is also his greatest weakness because when he knows something to be false, he cannot keep quiet about it and develops a kind of tunnel vision about making the truth known which blinds him to the potential consequences of pursuing that truth. Plame, meanwhile, is a sometimes maddeningly interior character (which is one of the things that makes her such a good operative) and surprisingly passive. When her cover is blown, she's prepared to tow the line and keep quiet, refusing to speak to the press. She's an extremely intelligent person who has been shown to be very quick on her feet, but in this particular instance she seems to be stuck and always second guessing herself.

The screenplay by Jez and John Butterworth is very strong, balancing the story so that it works both as a political thriller and as an intense character study, and director Doug Liman keeps things moving at an efficient pace, but the film really belongs to Watts and Penn. Penn's role is perhaps the showier part and he brings a lot of fire to the film, but Watts is equally good (if not better) in her more muted role. As Plame, she's cool-headed and strong; her own loyalties never waver. The crisis for her is in realizing that those she's counting on are perhaps not quite as loyal to her. She's angry at Wilson for not considering how his actions might affect her and their family, and she's shocked to discover that the CIA has turned its back on her, refusing her requests for protection after she begins receiving death threats. The way she slowly begins to break under the pressure and then rallies and rebuilds herself in order to fight is very compelling and Watts' performance is one of my favourite of the year so far.

i have o admit i really likeovies like this. the look of it though--with sean penn and naomi watts- reminds me of the transporter with penn and nicole kidman. but thanks for this review. i definitely still wanna see it.

I've never seen that one, so I can't attest to any similarities. Fair Game is a good one though.

This is one of the outstanding films of the last year for me. Watts and Penn together again, after the brilliant 21 Grams, are just superb.
I have wriiten a review on my own blog about this film so I won't go in it too much.
But the key strength of this film is its ability to get a reaction fom its audience. i felt anger and disgust at the American governments actions and with it the CIA's.
For me the test of a film is if I feel something afterwards...in other words was I moved? Yes! to anger!... so this film provided it. I think it is unmissable and I hope it gets more attention than it seems to be getting.