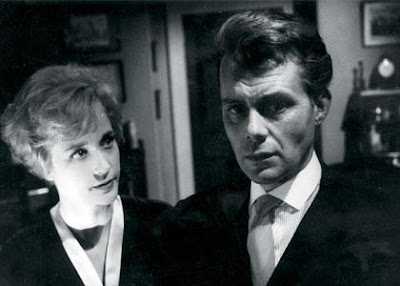 Seen today, Basil Dearden's Victim seems almost quaint in its delicate treatment of sex and sexuality. It was, however, a groundbreaking film, the first (at least in the English language) ever to use the word "homosexual," which resulted in it being banned in the United States. Given that you couldn't even acknowledge the existence of homosexuality in a direct, uncoded way without causing an outrage 49 years ago, it's perhaps no wonder that the NOH8 Campaign is necessary today.

Dirk Bogarde stars as Melville Farr, a successful barrister with a bright future ahead of him and a seemingly happy family life with his wife, Laura (Sylvia Syms). But beneath the surface, Farr is keeping a secret: he's been carrying on a very intense (though unconsummated) relationship with a young man named Boy Barrett (Peter McEnery), who has become the victim of blackmailers who know about the relationship. In order to pay off the blackmailers, Barrett has stolen £2,000 from his employers and now the police are after him. Upon finding him, the police also find out why he stole the money, leading him to commit suicide in order to protect Farr.

Farr's guilt about what has happened to Barrett is great and he decides to go after the blackmailers and stop them from ruining any more lives. Farr discovers the identities of other victims and tries to get their help, but their preference is to pay off the blackmailers and go about their lives (understandable given that in 1961 homosexuality was still criminalized and reporting the blackmail may have in turn opened them up to prosecution). Farr's crusade, however, has not gone unnoticed and his relationship with Barrett is exposed, leading to the collapse of his marriage and his career. Tired of being a victim, Farr decides to see the fight through to the end and opts to testify against his tormentors in order to obtain justice for himself and others.

Victim is obviously a message movie, but it's a message movie in the best possible way as it dramatizes the situation rather than simply doing a lot speechifying about it. Its a story rooted first and very firmly in character and builds its political context from there, making it easy for us as an audience to feel sympathy for and anger on behalf of Farr. In spite of the strong reactions it inspired upon its release (it was originally rated X in the UK), it is not an explicit film. We never see the "incriminating" photo, nor does Farr ever share so much as a kiss with Barrett, but it is nevertheless very direct regarding its subject. To put it in the proper context, Victim is as bold for 1961 as Brokeback Mountain was for 2005.

Though the world is a different place now than it was in 1961, Victim does not play out like a relic of the recent past. It's an effective thriller about a man who is essentially being hunted and who fights through his inner torment in order to figure out a way to turn the tables. Bogarde's performance is not simply good, it's also very brave given both his status as a leading man on screen and his sexuality off screen. He carries this film and plays a large role in its ultimate success and durability. It is not a perfect film - the ending suggests that Farr and his wife will ultimately reconcile, for one thing - but it's an important one and certainly one worth watching.