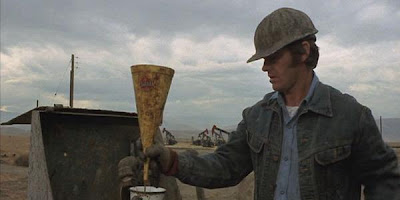 Like Al Pacino and Robert De Niro, Jack Nicholson is one of those actors who is both revered for his abilities and chastised for spending the past two or so decades coasting on former glory. It's easy to think of Nicholson as a parody of himself in movies like Anger Management or Something's Gotta Give, but when you see a movie like Five Easy Pieces, you realize that he's more than earned the right to coast.

In Five Easy Pieces Nicholson plays Robert Dupea, easily one of his best and most challenging characters. Born into a family of musicians, Dupea is a skilled classical pianist but works in an oil field. His complicated relationship with his family and what they represent, their legacy, colors many of his actions; to him, family is something that must be escaped. Unfortunately for him, his family is about to get bigger: his girlfriend, Rayette (Karen Black) is pregnant.

After finding out that his father has had a stroke, Dupea is talked into returning to the family home and even more reluctantly talked into taking Rayette along with him. Embarrased by how rough around the edges she is, Dupea leaves her in a motel while he returns to the family fold, where he meets his brother's fiancée, Catherine (Susan Anspach). Like him, Catherine is a pianist, and his attraction to her is immediate and reciprocated but their fling is cut short by Rayette's sudden arrival at the house. Dupea is irritated but only until Rayette becomes the subject of ridicule by other people in the house, at which point he becomes her fierce defender and protector. Eventually they leave together, but Dupea's continuing struggle between the intellectual world of his roots and the blue collar world where he's been residing makes it impossible from him to move forward.

Directed by Bob Rafelson and written by Rafelson and Carole Eastman, Five Easy Pieces is a film with a very secure place in pop culture thanks to Dupea's infamous lunch order, but it's so much more than that one scene or line of dialogue. It's a film that rings with authenticity, that draws its characters so solidly it's as if they stepped off the street and onto the screen. Dupea's struggle to belong (and his belief that he can never belong anywhere) is what makes him such a compelling character, a guy you root for even when he disappoints you. Nicholson's performance is masterful, ensuring that Dupea, who essentially adopts whatever persona best suits the company, nevertheless always seems consistent.

The screenplay is very strong, stacking memorable scene on top of memorable scene from beginning to end. The lunch scene is perhaps the best remembered, but the scene in which Dupea comes to Rayett'e defense in front of his family, and a monologue in which Dupea expresses his disappointment in himself to his father, who has been left unable to communicate by his stroke, are incredibly powerful. "I'm trying to imagine your half of this conversation," he tells his father, "My feeling is, if you could talk, we probably wouldn't be talking." His pain, his intensely negative view of himself, is beautifully expressed here and in the film's finale. The last scene (a "great last scene" if ever there was one) is remarkable both for its honesty and its daring and for confirming what we've come to know about Dupea. It's a strong ending to a strong film, one of the best from what is arguably the best decade for film.