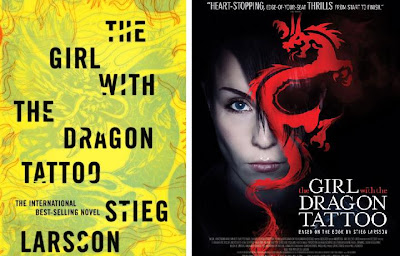 Plot: 40 years after the disappearance of Harriet Wagner, her uncle Henrik, certain that she has been murdered and that her murderer has been taunting him, hires disgraced journalist Mikael Blomkvist to investigate. With the help of computer hacker Lisbeth Salander, Mikael begins to unravel the mystery, discovering in the process that a serial killer has been at work in the area for decades and may now be targetting them.

Primary Differences Between Book and Film: The film compresses the story as presented in the book and also alters the timeline (for example, in the film Mikael serves his prison sentence at the end; in the book he serves his time in the middle of the story). The film also makes Lisbeth a more active character and involves her more deeply in the solving of the mystery, and it alters the resolution of the mystery somewhat.

For the Book: The book, by virtue of the fact that it has the luxury to take longer to tell its story, is also able to give us more direct insight into the characters and flesh out the relationships between the large cast of characters. There is also a different tone to the relationship between Mikael and Lisbeth in the book which makes it eaiser to see them as a potential romantic couple, whereas I never really felt they clicked that way in the film.

For the Film: Lisbeth is the story's most fascinating character both in the book and the film. By giving her a bigger role, the film centralizes the story's most compelling aspect and gives the story a stronger energy. Also, Lisbeth as a character is (somewhat) softer in the book than she is in the film and I liked the harder edges that Noomi Rapace's portrayal gives her. Oh, and did I mention that Rapace is just generally awesome? In all likelihood I don't even need to but, for the record, there it is.

Winner: Film. I prefer the streamlined version of events as told by the film and found that when I read the book, I spent a lot of time waiting for Lisbeth to come back. I like the book a lot, but to me the film is a lot more powerful and compelling.

I read a review somewhere that said that the books wern't very good at all and the movies are a big improvement. I don't think I care enough about the books to find out for myself but I like this feature you've got going here.

The books are definitely flawed, but well worth the read.