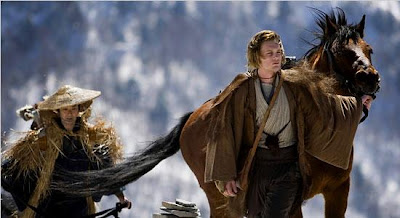 You win some, you lose some. Just two weeks ago I raved by Francois Girard's The Red Violin and now I'm writing, let's say, less enthusiastically about his follow-up, 2007's Silk. An airless period piece that travels from France to Japan and back again, it's a beautiful looking film that fails to live up to the potential of all the talent involved.

Set in the 19th Century, Silk follows Herve (Michael Pitt), a French military officer who longs to leave his position in order to marry Helene (Keira Knightley) and start a family. He's given such an opportunity by Baldabiou (Alfred Molina), an entrepreneur who has entered into the silk business and wants to hire Herve to go to Africa and obtain healthy silk worm eggs after European eggs become plagued by pébrine. Unfortunately the eggs from Africa are similarly affected and so Baldabiou sends Herve on a dangerous mission to Japan, where disease has never been known in silk worms, and which is entirely off-limits to foreigners. Herve is smuggled into Japan, makes the trade in a remote village, and finds himself intrigued by the concubine of the baron Jubei (Koji Yakusho). When he returns to France he marries Helene and the village enters into a period of great prosperity thanks to the eggs he's brought back.

Some time later he returns to Japan for more eggs and becomes more deeply enthralled with the concubine, who sends him home with a note she's written to him. He goes to Paris to have the note translated into English by a Japanese-born Madam, who advises him to forget its contents and live a happy life with his wife. His desire is too strong, however, and he returns to Japan despite the danger presented by the Meiji Restoration. The village where he bought the eggs has been razed, its occupants have fled. He returns to France heartbroken and his futile journey brings financial ruin to the village. Eventually he begins to recover from his experiences and even comes up with a way to keep the villagers employed, but the mysteries of his sojourns to Japan continue to haunt him.

To start with the good stuff, the cinematography by Alain Dostie is gorgeous, particularly in the scenes which takes place in Japan and during Herve's long journeys to get there. This is an exquisitely photographed film but, unfortunately, not a particularly good one. It's stiff and overly formal and, for a film about tortured love, oddly passionless. The emotions at play are so muted that they barely register, which makes it difficult to care about Herve's plight or the great revelation he comes to at the film's end.

As far as the acting goes, only Molina really emerges from this unscathed, finding a way to bring some vitality to his role. Neither Pitt nor Knightley - both of whom I generally like - are at the top of their game here. As the conflicted hero Pitt does little more than whisper and gaze longingly into the distance in order to convey Herve's profound sense of loss and Knightley (usually so good in period pieces) just seems adrift in her admittedly thankless role. It's disappointing to see so many talented people work together and come up so short, but Silk just doesn't quite measure up.