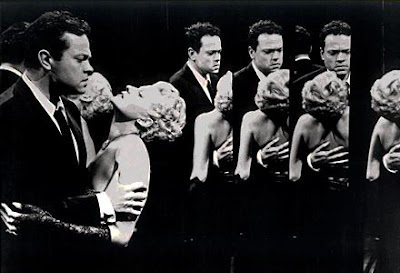 Year: 1947
Director: Orson Welles
Great Because...: The final sequence, which takes place in an amusement park fun house, is surreal, containing one brilliant, beautiful shot after another. The film itself is deeply flawed but the finale is a thing of warped perfection.

The plot of The Lady From Shanghai is a bit complicated but, in short, it involves Michael O'Hara who signs on to pilot a yacht owned by Arthur and Elsa Bannister as they journey from New York to San Fransisco. During the voyage Michael is approached by Arthur's law partner, George Grisby, who asks for his help faking his own death so that he can collect the insurance money. Michael agrees, planning to use the $5,000 Grisby offers him to run off with Elsa, but things of course go horribly awry. For one thing, Grisby and Elsa were actually working together and trying to set Michael up for Arthur's murder. For another, Grisby is actually killed and all the evidence that Michael helped plant back when he was helping Grisby fake his death has now come back to haunt him and he ends up on trial for murder.

Michael escapes from custody during the trial and runs off with Elsa, hiding out in Chinatown. There he discovers the extent of her betrayal and is knocked out. When he awakens he's in the fun house and after stumbling his way into the hall of mirrors, he's finally able to confront Elsa. However by this time Arthur has caught up with them with the intention of killing them and, suffice it to say, a whole bunch of mirrors and two angry people with guns is a bad combination.

Through the hall of mirrors scene Welles is able to visually express the layers that the story (and film noir in general, really) is playing with. It's layer upon layer of deception, layer upon layer of maneuvering, layer upon layer of identity, and in this final scene all these layers are at once stripped away, leaving the characters and the situation bared to their basic essences, and emphasized through the multiplicity and overlapping of images. Further, by using distorted images and framing shots so that they're slightly askew, Welles leaves the audience feeling just as out-of-step and off balance as Michael feels.

Laying aside the technical brilliance of the sequence, the ending is also strong from simply from a character stand point. Arthur and Elsa are both rendered fatal wounds, Arthur taunting Elsa as he dies, Elsa trying in vain to crawl away from the scene of the crime before collapsing and begging Michael for help. Like most noir heroes, however, Michael has had enough and just keeps walking. It's a great, strong ending, see for yourself:
Posted by Norma Desmond at 8:00 AM

Hi
Nice movie blog
Since the advent of the moving picture, America has surely had a fascination with Hollywood and movie stars. This is most clearly seen in the high value of celebrity and movie memorabilia.