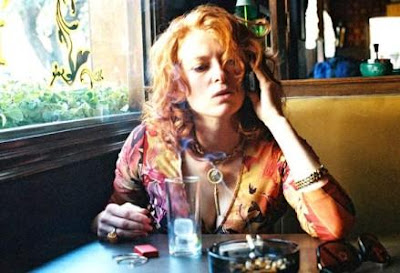 It takes courage to play a character as thoroughly unlikeable as Julia and it takes skill to make her half-way human. In her performance Tilda Swinton doesn't try to make the audience like her; her unselfconscious portrayal allows Julia to be one of the nastiest pieces of work ever to grace the screen. It isn't, however, simply a matter of letting herself be unlikeable. Swinton is also able to convey a sense of the character's increasingly distressed mental state, of the wheels turning in her head as she has to make quick decisions to keep her scam afloat, and of the tiny shred of humanity still alive at her core. It is a bravura performance that puts to shame many of the more celebrated performances of the last decade of film.

The first thing that must be understood about Julia is that she's an absolute mess. An alcoholic who spends most of her time trolling bars for booze and one night stands, her life is a shambles and she herself is kind of pathetic, though she defiantly, angrily refuses to see herself that way. She attends AA meetings but has no desire or intention of getting sober and she is nastiest to the people who most want to help her. When one day someone comes to her for help, Julia is quick to brush her off but the promise of a big payday perks her interest.

The woman in need is Elena, who promises to pay Julia a large sum of money to help her kidnap her son, whose wealthy grandfather has custody. Though reluctant at first, Julia agrees, but only because she's thought of a way to double cross Elena and get more money. When she realizes that Elena isn't all there and won't be able to give her any money at all, Julia decides to cut her out of the equation and handle things herself. She kidnaps the boy, treating him roughly, scaring the hell out of him, and unsettling him with the sometimes violent mood swings brought on by alcohol (or the lack of it). See, the thing about Julia is that she can't stay sober long enough to pull this thing off skillfully; she gets drunk and behaves stupidly and seems to diminish her chances of success with each horrible decision she makes.

In these early scenes with the kid, Swinton doesn't hold back. She allows Julia to be deliberately, unrepentantly cruel and as viewers we're scared for the boy because there's really no telling what Julia will do. We believe that she's capable of anything. A strange thing happens, though, after Julia has the boy in captivity and after she abandons the sobriety which has pushed her personality right to the edge: she starts to get kind of funny. "So... I guess you're mad at me," she states, totally drunk, at one point after leaving him tied up in the shower all day. Later still she attempts to use the fact that she hasn't actually shot him to persuade him that she's not really a bad person even though she's spent most of their time together training a gun on him. In her own special way, Julia is just as out to lunch as Elena is and though her inability to own her actions brings about the film's few lighter moments, it's also what makes her especially dangerous. If she can never take responsibility for the consequences of her actions, how is she ever supposed to recognize that she's gone too far?

The ability to quickly and believably shift gears with this character is a big part of what makes Swinton's performance so good, but there's more to it than that. At one point Julia finds herself in the position of having lost the boy to another set of kidnappers who think that she is his mother. Swinton is called upon to play this scene in such a way that we the audience can see the wheels turning in her head as she improvises to deal with this new development, while also making it believable that the kidnappers can't see through her facade. It's a very delicate undertaking and she pulls it off beautifully, showing us layer upon layer but making it seem utterly natural.

On the face of it, Julia is an evil character. She is so unfathomably selfish and greedy that even when she's trying to save the kid from the other kidnappers, she's still working an angle, trying to figure out how she can save him without forfeiting the money. At the same time, however, Swinton makes us believe that in her own twisted, ridiculous way she's come to care about someone other than herself. For all the brutality on display in this performance there is also a surprising amount of tenderness and though the film doesn't compromise the character (or itself) with any false sentimentality at the end, it does allow Julia to be more than a two-dimensional villain. Watching the film, you can't help but think that no other actor could have played the role, Swinton's mark on the character is that indelible.

How Tilda did not get an Oscar for this sickens me. This is just about the least likable heroine I've ever seen in a film, and Tilda is full-on amazing in her portrayal of this greedy, sloppy, hateful woman. She does not hold anything back. She has no vanity. I love that about her.

I suspect that is all comes down to money. There wasn't enough to create a campaign for her and Oscar unfortunately tends to come down to who has the best campaign, rather than who has the best performance.

It kind of kills me that of all the roles Swinton has played it was the one in Michael Clayton that got her an Oscar. She's very good in that movie but she's done way more challenging and impressive work in other films.