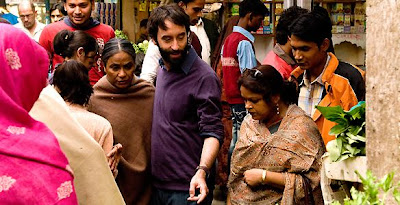 Can a movie really be considered a comedy if it leaves you feelings so bad afterwards? Cooking with Stella was marketted as a comedy and it plays out as a comedy but it gets so mean-spirited towards the end that I kind of found myself wishing I'd never watched it in the first place. It's too bad because the film actually does have some good moments but they end up being marred by the ugliness of the film's ending.

The film takes place at the Canadian High Commission in New Dehli and centers on Stella (Seema Biswas), who has been a cook for a revolving door of posted dipolmats for about 30 years. Her current diplomatic employer is Maya (Lisa Ray), who has come with her husband Michael (Don McKellar) and their infant daughter. Both Maya and Michael disrupt Stella's expectations of her relationship to her employers, Maya because she's half-Indian but doesn't identify that way - "I was born in Toronto. I'm Canadian," she tells Stella. In very measured tones Stella replies, "As you wish." - and Michael because he doesn't seem to recognize the boundaries that separate him from the staff. Like Stella, Michael is a chef by trade and he wants to learn how to make authentic Indian dishes. Stella is reluctant but ultimately agrees to teach him.

With Michael busy learning from Stella, a nanny is hired to care for the baby. Tannu (Shriya Saran) has never been employed by diplomats before, which is why she comes so cheap, and she sends her earnings to her father to pay medical expenses for her sick brother. Stella attempts to take Tannu under her wing and get her involved in the black market business she has going (which involves stealing from her employers) but Tannu refuses and threatens to expose Stella unless she stops, too. Undaunted, Stella arranges for her godson Anthony (Vansh Bhardwaj) to charm Tannu and bilk her of her earnings so that she'll have no choice but to join Stella.

Typically in a film what would then happen is that Tannu would discover the connection between Anthony and Stella, realize that she's been played, and try to set things right. Similarly, Stella would come to have a genuine affection for Michael and would come to feel bad about taking advantage of him. Neither of these things happen, which I suppose should earn the film points for defying expectations but the turn that the plot takes undercuts whatever charms it had going for it up to this point. No longer content with the small money from the black market business, Stella, Tannu and Anthony hatch a plot to fake Stella's kidnapping in order to get a ransom. Michael and Maya agree to pony up $20k for her safe return and the Canadian government agrees to hand over $40k in exchange for information leading to the capture of the kidnappers. In light of that, Stella agrees to let Tannu turn her in so that the three conspirators can split $40k instead of 20. Stella is convicted, goes to jail and then, with Michael's intervention, is released early and goes off to enjoy her ill-gotten gains with Tannu and Anthony.

Are we really supposed to see this as a happy ending? I mean, yes, on the one hand Stella and company are oppressed people striking a figurative blow against the man, but on the other hand they're literally scamming two people who have been nothing but nice to them. Michael, in particular, comes to care deeply for Stella as his mentor, so much so that he's willing to forgive the fake kidnapping to help her get out of jail. Why does he deserve to be robbed, deceived, and made a fool of? It's really disheartening and frankly kind of gross.

Anyway, whatever the faults of the film itself, none lies with the actors. Biswas and McKellar are particularly good and Ray makes the most of a role that gives her little to work with. All three deserve to be in a better movie.

Interesting - but what about Micheal's ripping off Stella's knowledge of cooking? Michael will go on to open his own restaurant and make a lot of money(tons more compared to the measly amount he tried to pay Stella) from what Stella taught him - what does Stella get from it? I think the 'ripping off' goes both ways.

(Look up the chef Rick Bayless - this is exactly what he did.)