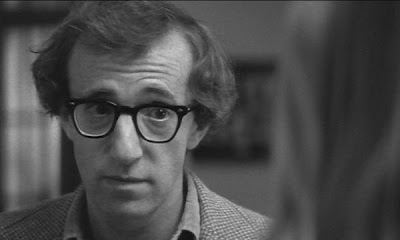 Year: 1979
Director: Woody Allen
Great Because...: It's one of those "out of the mouths of babes" situations that really puts the rest of the story into perspective. In a movie full of people with very intellectual pursuits, you don't really expect the smartest person to end up being a high school student. Her sincere appraisal of the situation as the movie closes, however, is sweet and perhaps the most truthful thing said in the entire film.

Like most of Woody Allen's films, Manhattan is about relationships - romantic relationships, friendships, the intricacies of social maneuvering and co-existing amongst other people. Basically, there are two couples: Isaac and Tracy, and Yale and Mary. Isaac's relationship with Tracy is problematic because she's only 17 (at one point he marvels about how he's older than her father); Yale's relationship with Mary is problematic because he's married. After breaking things off with Mary, Yale gently steers her and Isaac together, resulting in Isaac breaking things off with Tracy. After Isaac and Mary have gotten together, however, the lingering feelings between Yale and Mary bubble up to the surface again. Yale wants Mary back and Isaac, after losing Mary, longs once again for Tracy.

Isaac, Yale and Mary are all undeniably smart people and yet when it comes to conducting their relationships, it's almost like they're still in high school. When Yale informs Isaac that he wants Mary back, his argument literally boils down to "I saw her first." The three of them spend a lot of time intellectualizing what's going on, but ultimately none of them is particularly mature about it. So Mary goes back to Yale and Isaac, having stewed on it for a while, decides that he wants Tracy back, which brings the film to its final, brilliant scene.

Isaac rushes to Tracy, who he finds preparing to leave to spend six months studying in London. When they were together he encouraged her to go, perhaps because her doing so would make it easier for him to slip out of the relationship. Now that he wants her back he asks her to stay. It's a stunning display of selfishness that really undercuts Isaac's claim that he broke things off with Tracy because she wasn't mature enough. Undercutting it further is Tracy's reply to his request: "What's six months if we still love each other?" and, the film's final line, "You have to have a little faith in people."

There's a lot that Tracy doesn't know (at 17 she is still just a kid) but in this final scene she shows that she is easily the most emotionally mature character in the entire film. She may not know much about life yet, but she at least has the advantage of knowing herself and that gives her the ability to have faith in others. Isaac's expression as the scene closes seems to say a number of things simultaneously: he gets what she's saying, he's surprised by her insight, he's surprised by his inability to manipulate her to his will, and he thinks it's naive to believe in the good intentions of other people. He is himself an unreliable person when it comes to relationships so how could he possibly have faith in someone else?

The best films make you wonder what happened to the characters after the credits. I can't help but wonder what ever became of Isaac and Tracy.

Terrific encapsulation of the film in general and the memorable final scene in particular.

"In a movie full of people with very intellectual pursuits, you don't really expect the smartest person to end up being a high school student." Touche!

I know, I saw your review the other day and I was like "great minds think alike this week!"

Wonderful overview of the film. The discussion of the final scene makes me want to watch the film again. Manhattan is not only one of Allen's best films, it's also one of his best looking.

Wonderful post indeed. This is one of the favorite endings. WA's reaction when tracey says to have faith in people is terrific. As somebody said, you made me to watch this again.

What a perfect summary of the film, thank you for putting into words what I felt but could not express. The last scene is my favourite of all times, and not only because of what is being said but mostly because of Woody Allen's speaking eyes. I can't stop watching over and over those few seconds when he looks at Tracy and I find it so heartwarming every time. Those eyes express so many different emotions, but above all warmth, and that is why I love Woody Allen.

i think Allen's smith in the final scene, after some deliberation, is upon his -and your well identified- final thought regarding the naive nature of believing in the good will of people

I, too, love this movie, but I recently read that Woody now considers it too preachy. I think it is just preachy enuf.

Absolutely beautiful summary. It's my favorite film for over 30 years and you did a great job illuminating the main themes. Thank you.