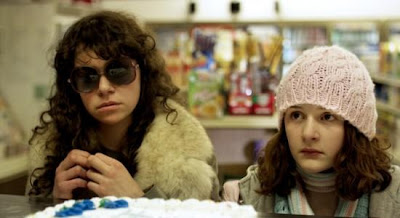 I don't know what it is about Canadian filmmakers, but they seem to excel at coming-of-age stories. Off the top of my head: Flower and Garnet, Lost and Delirious, Punch, New Waterford Girl, C.R.A.Z.Y., It's Not Me I Swear!. And now, Grown Up Movie Star, an alternately funny and touching film about both coming-of-age and coming out.

The film centers on Ruby (Tatiana Maslany), your typical coming-of-age heroine who is too big for her small surroundings and dreams of escaping to greater things. Her mother has taken off for the States to pursue her dreams of movie stardom, leaving Ruby and her sister Rose (Julia Kennedy) to be raised by their father, Ray (Shawn Doyle). Ray is a former NHL player whose career ended in disgrace after being convicted of drug trafficking and now he's sort of aimless and definitely unprepared to deal with the issues that arise as a result of Ruby taking her first steps into adulthood.

Much of the story is concerned with questions about, and explorations of, sexuality. Ruby develops a crush on Will (Mark O'Brien), the new boy in school who seems somewhat glamorous to her because he comes from the States. She has a harmless make out session with her female best friend, and develops an increasingly dangerous intimacy with her father's best friend, Stuart (Jonny Harris), an amateur photographer who agrees to take Ruby's head shots so that she can join her mother in the U.S. and try to make it in movies herself. Though innocent enough at first, the photo sessions quickly take on darker undertones and Ruby finds herself in the midst of a power relationship that she has no idea how to negotiate, which makes its effects all the more painful.

Running alongside Ruby's story of sexual self-discovery is Ray's, which is just as fraught and traumatic. For years Ray has kept the fact that he's gay under wraps, trying to mask it with his marriage and his status as an athlete, though as the film carries on it becomes clear that his sexuality is more or less an open secret, something people know about but don't talk about. Unbeknownst to Ruby and Rose (for a while, at least), their father's affair with the high school's hockey coach (Steve Cochrane) was real reason their mother left and when Ruby finds out it makes her relationship with her father even more strained. Though shocked by the discovery, Ruby's only real problem with it is Ray's steadfast refusal to be honest about it, denying it just as he's denying the inevitability of Ruby becoming a sexual being. The relationship between father and daughter is presented in a complex and intense way. There's the sense that they want to get along and like each other, but are just so deeply at odds with the way they view things that the process of reconciling themselves to each other is made all the more difficult.

Because the story divides itself fairly evenly between Ruby and Ray's journies of self-discovery, the burden of carrying the film ends up being shouldered by both Maslany and Doyle. This is good because while Maslany excels at scenes which lean more towards comedy (the verbal sparring matches between Ruby and her grandfather are a particular treat), she's a bit weaker when it comes to the more dramatic moments, with the exception a crucial scene between Ruby and Stuart in which her vulnerability and uncertainty take things to a level where it's almost unbearable to watch, it feels so intense and real. As for Doyle, he does an excellent job with his profoundly conflicted character, guiding him from denial to a tacit kind of acceptance. The ending of the film could be stronger, but all in all it makes for a very satisfying viewing experience thanks in no small part to the performances.

Hi
Nice canadian film review i like it
Every year millions of people visit Los Angeles in Hollywood in hopes of experiencing a taste of the film and television experience.