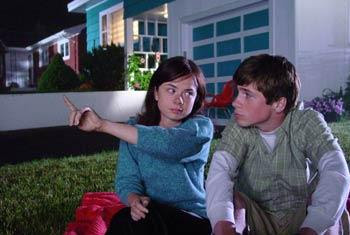 You can't approach life as an academic exercise. If you're living only to systematically work through a list of things that must be accomplished, you may be missing out on the "living" part of being alive. That's Love That Boy in a nutshell; it's all about the protagonist's realization that maybe she should just relax and let things happen. Of course, once she does that she starts to drift towards legally/socially murky territory but I'll get to that in a minute.

The film centers on Phoebe (Nadia Litz) who is about the graduate from University and has a long list of things she wants to accomplish first. In flashbacks we see that this is pretty much the way she has always conducted her life, setting goals not for the pleasure that accomplishing them might bring her, but merely for the ability to say that she's done it and cross it off her list. She has been dragging her roommate Robin (Nikki Barnett) along for the ride but one day Robin has enough and flees, taking up with a hitchhiker and going for an adventure. Phoebe is hurt but it's easy to see Robin's point. Phoebe is very controlling and Robin treated less as a friend than an appendage; her opinions are dismissed by Phoebe who has no interest in letting Robin's desires get in the way of her own plans.

Before leaving, Robin gives Phoebe a challenge: add have a boyfriend to the list of things to do before graduating. Phoebe does this and works at it the way she works at everything else, in a detached, almost anthropological way. This does not yield the best results and the project seems like a failure until she begins spending time with Frazer (Adrien Dixon), who lives across the street. They fall for each other but there's a problem: he's only 14.

I have an issue in principle with the notion that a relationship like this is supposed to be cute because it's the guy who is younger when, if the roles were reversed and we were talking about a 21-year-old guy and a 14-year-old girl, the film would likely take on much darker undertones. That being said, however, the relationship that develops between the two is very chaste and though Frazier goes to the trouble of buying condoms (a 14-year-old boy can hope, right?), Phoebe doesn't actually get anywhere near having sex with him and the ending suggests that any further developments between them will be put on hold for a couple of years at least. So Phoebe doesn't have to add "become a sex offender" to her list, which is good.

Tonally, the film starts out very stiff but gradually relaxes, which I suppose can be read as a reflection of Phoebe's personal state. She exists in very rigid terms at the beginning of the film but some of her harder edges are softened as the story progresses and by the end she's actually rather likeable. Also likeable is Robin, who discovers too late that the hitchhiker she's set off with is actually way too whiny and high maintenance for her comfort level, turning her fun, spontaneous adventure into an exercise in patience. Also on board in a small role is Ellen Page as a girl playing hard-to-get mind games with Frazier, so if you're a fan of hers it's worth a look.

Posted by Norma Desmond at 9:10 AM