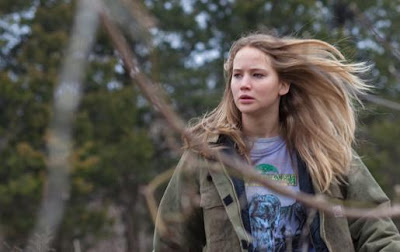 I am very, very glad that I was able to see this movie on a sunny afternoon in July and not a cold evening in November because otherwise I think I would have walked out of the theater with an unrelenting feeling of sorrow (it would have been like seeing The Road all over again). Debra Granik's Winter's Bone is a bleak film. It is also brilliant. See it if you can.

Jennifer Lawrence stars as Ree, a 17-year-old trying desperately to keep her family above water. Her father is a career criminal currently gone AWOL, her mother is an absent presence whom Ree describes as having gone crazy to avoid having to deal with the trouble that follows her father around. She has two younger siblings, a 12-year-old brother and a 6-year-old sister, and poverty threatens to finally overtake the family on a daily basis. When the sheriff arrives and informs Ree that her father put the house up as collateral for his bail and that if he fails to show up for his next court date the family will be turned out, it’s just one more thing in a long line of things weighing down on her. “I’ll find him,” she declares and she sets out to do so with a steely determination.

Ree sets off through the mountain community, calling on a series of people who may have information about her father’s whereabouts, all of whom seem to have at least a thin familial link to her and all of whom, in one way or another, seem to be involved in the drug trade. Meth is the drug of choice, though it doesn’t seem to have made much money for anyone; everyone appears to live an existence as hand-to-mouth as Ree and her family. No one wants to tell her anything and most encourage her to stop digging around for information, including her uncle Teardrop (John Hawkes), who warns her that she has no idea what she's getting herself into or what unspoken codes of conduct she's breaching. But she can't stop. One way or another, she has to find her father.

Much of the film's success depends on Granik's ability to covey a sense of the community in which Ree is living. These are people who are at once tightly-knit (at one point Ree remarks, "We're all related, aren't we?") but also set apart from each other in isolated, fiercely loyal pockets. They are mistrustful of outsiders such as the sheriff and the bail bondsman, but also of insider-outsiders like Ree, who can speak their language but isn't really one of them. They are capable of generosity (despite the poverty that runs rampant everywhere she goes most of the people Ree visits offer her money or food after refusing to answer her questions) but also of startling, vicious brutality. There is always a danger with stories and characters like this that the film may lapse into folksy primitivism or a fetishization of poverty, but Granik sidesteps that by taking a very direct view. She confronts these characters and the grim landscape in which they live head-on, fostering a very lived-in feel in the setting and plunging us into this world rather than viewing it from the outside. She adopted a similar approach in her previous film Down to the Bone and if anything it works even better here. We're in it but, as viewers, we're also outside of it and we see it through the eyes of Ree who occupies a similar position. She is capable of understanding what's going on but she may never be able see the full and complete picture.

Any discussion of Winter's Bone has to include mention of the performance by Jennifer Lawrence, who announces herself here as an actress to watch out for (and whose next film is, unfortunately, the Mel Gibson-starring The Beaver). In her hands Ree is a character who is strong but not cocky, someone whose existence seems to be an exercise in swallowing ones pride. Without her, the family would be sunk and she knows it so she keeps it together for them as best she can and teaches her younger siblings essential lessons in how to get by. She is an endlessly compelling character and Lawrence's performance feels authentic to the core. I would recommend Winter's Bone on the strength of her performance alone, but luckily everything around it is just as riveting.

Couldn't agree with you more - this is one of the year's best for certain. And I was likewise thankful that I was able to leave this movie and step into sunshine.

I like that you mention THE ROAD here, because I was remeinded of that film with the very dull colour palette that this film employs...which of course suits that grim Missouri landscape so well.

Great post! Hopefully more people get out there and see this flick.

Yeah, I think the main difference between Winter's Bone and The Road is that I can envision myself seeing the former again whereas I feel like I'm still recovering from the latter.

Meanwhile, I've got the strange taste for dark films that has me reaching for grim films like THE ROAD on days where I'm at home sick from work.

Good catch btw on the way her friends and neighbours tell her to shut up and fuck off, but offer her a cup of coffee as they do. It's details like that which make this movie and these characters so distinct for me.

This movie floored me with how GOOD it is, and Lawrence offers one of the best performance I've seen in ages. Great review!

I wasn't totally involved with this story, but the acting and character driven element made me like it more. Still, I think it's the weakest out of the Best Picture race this year! Good review, check out mine when you can!

I really did like this and I can't agree with you more on the performance of Jennifer Lawrence. I wrote excatly the say thing in my own review. She is an actress to keep an eye on for sure.