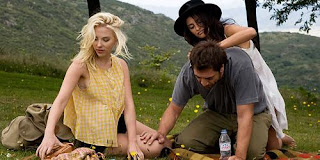 There’s something comforting to me about those familiar white on black titles that begin every Woody Allen film. Seeing them, I know that I’m about to enter a world where the people (most of them, anyway) speak intelligently, have interesting ideas, and prove that you can be the smartest person in the world but still be a complete idiot when it comes to relationships. Sometimes – especially lately – the promise contained in those opening titles is disappointed and sometimes it is not. Vicky Cristina Barcelona is perhaps not destined to become a classic like Annie Hall or Manhattan, but I still walked out of it very happy.

Vicky (Rebecca Hall) and Christina (Scarlett Johnasson) are two Americans spending the summer in Barcelona. Vicky, who is engaged, is working on her Master’s thesis about Catalan culture and Christina is more or less just along for the ride. They meet a painter named Juan Antonio (Javier Bardem) who invites them to spend the weekend with him. Vicky is appalled by his forwardness, but Christina is intrigued and talks her into accepting his offer. After an evening of wine and oysters, Christina falls ill, leaving Vicky and Juan Antonio to their own devices, which results in them spending the night together. Later, after guilt has caused Vicky to retreat back into her studies, Juan Antonio and Christina pick up where they left off. Soon, however, another woman moves into the picture to disrupt the harmony of their relationship – Maria Elena (Penelope Cruz), Juan Antonio’s ex-wife.

The story plays out as a series of couplings and uncouplings, simultaneous couplings and unrequited couplings. When he first encounters Vicky and Christina, Juan Antonio explains to them that life is meaningless, love fleeting, that the moment and the moment alone is worth living for. The film itself seems to follow this philosophy, as various characters find themselves dissatisfied in their relationships and flirting with the possibility of beginning new ones, only to find something lacking in these new relationships as well. If there is any one message in the film, I suppose it’s that there’s no such thing as perfect, lasting happiness, and that all things are transitory.

The performances in the film are uniformly good and reminded me of something which I often find myself thinking after seeing a Woody Allen film, which is that of all directors working today, I think he’s the most consistently great at directing women and giving them interesting characters to play. Christina is a dilettante who has adopted the role of the “free spirit” with all its inherent clichés, but ultimately doesn’t really know herself yet, and Johansson plays all these notes to perfection. Maria Elena is a tempestuous artist who perhaps plays up that tempestuousness because she’s an artist and it’s expected of her, and when Cruz enters the fray the polite energy of the film changes completely and new dimensions are given to the story. Vicky is the kind of woman who will (almost) always do exactly what is expected of her because, as she herself admits, she lacks the courage to be more like Christina. As Vicky, Hall was the biggest surprise for me – Cruz has been getting the lion’s share of the attention for the film, but Hall is just as worthy, making her character, who might simply have been the shrill stick in the mud, effortlessly relatable and likeable.

I enjoyed Vicky Cristina Barcelona a great deal, though I concede that it isn’t a masterpiece. There is a narrator who intrudes throughout to tie the details together, which has the effect of making this the cinematic equivalent of a particularly well-written summer beach read. It’s light and breezy, easily consumed and not especially challenging, but the perfect complement to a lazy summer day.

So it's not 'The best Woody Allen film in 20 years,' like the advertisement says? That's disappointing. As a 23 year old male, will I feel this is too much of a chick flick to enjoy?

Well, my pick for the best Woody Allen movie of the last 20 years would be Bullets Over Broadway - to call any of his movies "the best" is a really subjective thing.

This one is really good, though, and definitely not a "chick flick." There were a lot of guys at the showing I saw and they all seemed to enjoy it.