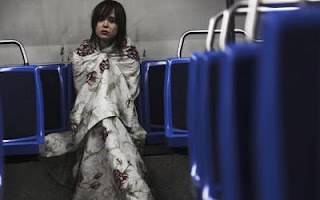 By virtue of its design, The Tracey Fragments is perhaps destined to be divisive. This is a challenging film; one that’s not easily accessible or easy to pin down. It isn’t until the last ten or so minutes that the story really begins to gel, at least according to any traditional understanding of narrative. In this sense, it’s a film that is perhaps best seen twice. The first viewing can be a difficult experience, but subsequent viewings tend to be much smoother.

The story (as best as I can piece it together): Tracey Berkowitz (Ellen Page) is a 15-year-old outcast and loner, picked on and humiliated at school, and tortured at home by the toxic atmosphere created by her bickering parents. The only person she seems to connect with in any positive way is her brother, Sonny, a little boy who believes that he’s a dog. After showing up at school in a skimpy outfit, her father grounds her, which doesn’t stop her from going out. Loyal dog that he is, Sonny follows her and they play fetch with a tennis ball. During their game she becomes distracted by the appearance of a boy from school that she likes, who figures into her fantasies as a rock star named Billy Zero. After Billy leaves, Tracey realizes that she’s lost Sonny. Her determination to find him leads her on a mad quest through the city and eventually to the home a drug dealer, where things go from bad to worse and she finds herself sitting on a bus wearing nothing but her underwear and a shower curtain.

There is hardly a moment when the film doesn’t call attention to itself as a film. Only rarely does a shot take up the entire screen; most often the screen is split into four shots, or one big shot with several smaller shots layered over it. These fractured shot compositions underscore the fragility of Tracey's psyche, reflecting her inner pain and confusion. It could easily be argued that the film is a little too conscious of itself, that the style is overbearing to the point of being just a bit precious. Like I said, the first viewing can be difficult and it wasn’t until it was almost over that I really started to move past the style and be involved in the story.

As Tracey, Ellen Page delivers a strong performance, one that manages to stand out where a lesser actress would have found herself steamrolled by the style and structure of the story. This is a brave performance and Page doesn't hold anything back whether Tracey is enduring cruel humiliation or momentary joy. While the success of Juno might find her typecast for a while as the endearingly sarcastic teen, she's capable of a great deal more and I hope that she's able to find roles which truly showcase the extent of her talents.

I don't know that I can say that I "enjoyed" The Tracey Fragments as such, but I certainly admire the abilities of director Bruce McDonald. A story like this one can be difficult to pull off not only because it requires a lot of work on the part of the audience, but also because it's very limiting in terms of how much story can be told. All that you see is what is in Tracey's mind and it takes a great deal of control to keep other perspectives from invading in order to fill in the blanks or bridge one vignette to another. That this movie works and is able to maintain a purity of perspective is no minor accomplishment.

LOVED the style of this movie, but found myself wanting more from the story. I'm hoping McDonald can expand the technique and use it on a more complete film.