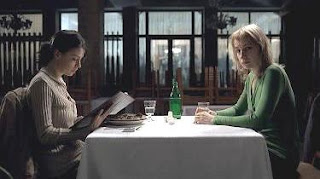 It’s unfortunate that 4 months, 3 weeks and 2 days didn’t make the shortlist for foreign language selections at last year’s Oscars, because it makes an interesting counter-point to Best Picture nominee Juno. While Juno flirts briefly with “procuring a hasty abortion” that she could get with relative ease, the two women in this film go to great lengths to have an abortion performed under questionable circumstances which could land them in jail if found out. Director Cristina Mungiu doesn’t pull any punches in this film, which is absolutely brutal in the way that it unfolds.

Otilia (Anamaria Marinca, in an amazing performance) has agreed to help her roommate Gabriela (Laura Vasiliu) get an abortion, an illegal procedure in 1980s Romania and one which will have to be undertaken with great care and secrecy. Although Gabriela is the one having the abortion, it’s Otilia who does all the leg work, getting the money together, getting the hotel room where it will be performed, and meeting the abortionist. Gabriela is so completely passive during this whole situation that you almost wonder whether the abortion itself was even her idea.

The story takes place over the course of about 24 hours, during which time Otilia must deal not only with Gabriela’s situation, but also her own problems, namely the fact that she’s promised her boyfriend, Adi (Alexandru Potocean), that she’ll come over for his mother’s birthday. When she arrives he chastises her for being late and forgetting the flowers, and then she’s given a place at the overcrowded table filled with people she doesn’t know, snobby members of the intelligentsia who makes her keenly aware of her own humble origins. The dinner scene is in some ways even more uncomfortable to watch than the scenes of the abortion being performed.

This movie, told in such an unflinching and almost cold way, reminded me a lot of Vera Drake, which also examines the issue of abortion. Neither film particularly advocates abortion, but both are critical of anti-abortion legislation. Regardless of whether you’re pro or anti-choice, it’s difficult to argue against the point of both these films, which is that anti-abortion laws disenfranchise women, especially those of lesser means. Realistically, if a woman really wants to terminate a pregnancy, she’ll find a way to do it whether it’s legal or not and regardless of the danger. In this film, Gabriela has arranged the services of a man named Bebe (Vlad Ivanov), who is already irritated with her for sending Otilia to meet him instead of coming herself, and for getting a room in the wrong hotel. When it comes out that the women don’t have quite enough to pay him, he tells them that they can make up the balance by having sex with him. Afterwards he gets the procedure started and then leaves before it’s completed, so that the two women have to deal with the actual expulsion, clean-up and disposal on their own. There’s nothing about this situation which makes me think it’s in any way preferable to allowing doctors to legally and safely terminate pregnancies.

Everything in this movie falls on the shoulders of Marinca, as the story seems to be propelled forward by the sheer force of Otilia’s will. Gabriela almost seems like an afterthought – shots are composed so that your gaze is directed to Otilia; in fact, sometimes you have no choice but to look at her. This isn’t meant to take anything away from the performance by Vasiliu, who plays Gabriela as someone determined to go through life believing that if she just ignores something long enough, it will go away on its own; it’s just that the film is so completely dominated by the mesmerizing performance at its centre.