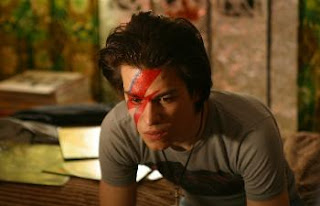 C.R.A.Z.Y. is a film that I wanted to like a lot more than I actually did. The central performance by Marc-André Grodin is fantastic, and the film itself has moments of greatness, but ultimately Jean-Marc Vallée’s coming-of-age drama is somewhat lacking in focus, making for a film that wants to be more than it actually is.

Grodin plays Zach, the fourth son of Gervais (Michael Coté) and Laurianne (Danielle Proulx), and one who suffers the misfortune of being born on Christmas Eve (a circumstance with which I completely sympathize, having been a Christmas Eve baby myself). Much of the film is concerned with Zach’s emerging homosexuality and the attempts by both himself and his father to come to terms with it. The film is at its best when it explores the relationship between these two characters, both of whom recognize Zach’s burgeoning sexuality and go out of their way to avoid acknowledging it, as if by doing so it will resolve itself and simply go away. One of the film’s most powerful moments comes early, when Gervais walks in on young Zach trying on his mother’s clothes, and his voice-over informs us sadly that in this moment, he unwittingly declared war on his father. In scenes like this one, where the film deals directly and sincerely with this relationship that seems to become more fraught every day, it hits upon a truth that makes it incredibly compelling.

However, this is only part of the story that the film wants to tell, and a great deal of time is focused on Raymond (Pierre-Luc Brillant), one of Zach’s brothers, an addict whose troubles with drugs and the law more or less hold his family hostage until his inevitable death. This section of the film is strong in and of itself, but putting it together with Zach’s story makes for a narrative that can occasionally feel overloaded, like two films that have been smashed together into one.

The four main performances are all fantastic, especially that of Grodin, who delivers a well-rounded and engaging performance as someone who longs for his father’s acceptance even as he’s rejecting everything that his father represents. As Raymond, Brillant delivers a high energy performance, tearing through the family like a tornado. He doesn’t do much that doesn’t cause the family pain, but there are little moments that make you understand why the family continues to give him chance after chance. As the parents, Proulx and Coté are great, with Laurianne acting as the glue trying to hold the fragile family together, and Gervais struggling with the fact that the family hasn’t turned out the way he had planned. That he isn’t presented to us as a villain attests to the strength of the film and the performance. This is a very real character, one who struggles to understand the men that his sons have become and who often reacts in ways that are hurtful, but he isn’t a monster. He’s just a man coming to terms with the fact that he can’t be in control of everything.

There’s a lot that this film gets really right – particularly the little details inherent in being part of a family, perfectly capturing the way that family traditions can be at once absolutely mortifying but also incredibly comforting – but it’s like too much of a good thing. As good as the individual elements of C.R.A.Z.Y. are, it doesn’t blend all of these elements cohesively. When, at the close of the film we realize that the title refers to the five brothers, it feels a little like a cheat - we only ever get to know two of brothers while the other three occupy the very edges of the story, as minor as characters can possibly be. In no way is C.R.A.Z.Y. a bad film, but it is a frustrating film in many ways because every frame reveals how great it could have been if only it were a little more tightly focused.

I`d have to completely agree with your review. It`s definitely worth watching, but in the end does not quite manage to be what it could have been.