LAMB Movie of the Month: Nausicaa of the Valley of the Wind (1984) 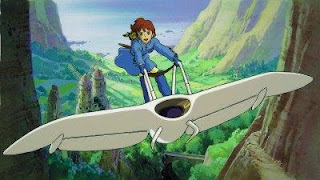 Once again I owe a debt to the LAMB's Movie of the Month for pushing me in a direction I've been meaning to go for a while but somehow never got around to before. Nausicaa of the Valley of the Wind is my first experience with anime - not because I have any aversion to the genre, but more because I don't live in a place that really caters to that particular genre. While I didn't love Nausicaa of the Valley of the Wind, it's a nice introduction to a genre that I hope to experience more of.

Set in the future, after environmental disaster has ravaged the earth and made large sections of the planet uninhabitable, the film follows the adventures of Nausicaa, Princess of The Valley of the Wind. When the plane of a neighbouring kingdom crashes into the valley, followed shortly thereafter by a full-scale invasion of the war-like Tolmekians, the valley is drawn into a war that threatens to destroy mankind. Only Nausicaa, who has come to understand the delicate balance of the ecosystem, can save her people and all others.

On a purely visual level, the film is absolutely stunning. There are several sequences that are breathtakingly detailed – my favourite comes from the opening minutes, when Nausicaa is searching for materials that can be put to use in the valley, and watches as a shower of spores comes down around her like snow. The creatures that Nausicaa encounters, and the various places she finds herself, are also magnificently rendered, creating a world that is equal parts terrifying and beautiful.

The film is also interesting from a narrative standpoint. The story takes the form of a fable, with an overriding mythology contained at the heart of the central conflict and characters falling into classical archetypes (but also subverting those archetypes by making the hero female). In certain respects, the story is told in simplistic terms: Nausicaa is good and so are her people, the Tolmekians are bad – especially their deformed leader, Kushana – there is one right way, and not much room for shades of gray between black and white. This isn’t meant to be a criticism, as this simple and straight-forward way of relating the story is really effective in terms relaying its meaning. There is a firm message advocating pacifism and environmentalism – the two are definitively linked here, with war being framed as an offshoot of ecological destruction and vice versa – which is conveyed in a very direct way rather than expressed metaphorically or through codes.

The film does have its problems, however. There's a lot of over-narration and a lot of superfluous exposition. Granted, this may not be a problem with the film itself as originally conceived by Hayao Miyazaki, but rather a quality of the version I saw, the 2005 edition with voice-work by Patrick Stewart, Alison Lohman, Shia LeBeouf and Uma Thurman. There is also an issue with pacing. While the film managed to hold my attention for the most part, overall I think it has a problem with building and maintaining momentum. Some scenes go on too long, meander or are digressive. A few cuts would have improved the film, tightening the storytelling and allowing it to run at a clip appropriate to the urgency of the situation unfolding onscreen.

I don't know much about anime, but I doubt Miyazaki represents the standard of the genre. Having initially become acquianted with his work through my kids--i.e. skeptically to start--I believe his films are so good on their own merits that they far transcend the limitations of animation and children's films.

Of the films I have seen--My Neighbor Totoro, Laputa: Castle in the Sky, Porco Rosso, Princess Mononoke, Kiki's Delivery Service, Howl's Moving Castle, and his magnum opus Swept Away--every one of them is a gem. Obviously, Nausicaa is a work from his early career and though I haven't seen it I'd be willing to put money on the fact that it is at least modestly brilliant. Miyazaki is one of the great lights of filmmaking alive today. (John Lasseter of Pixar would heartily agree.)