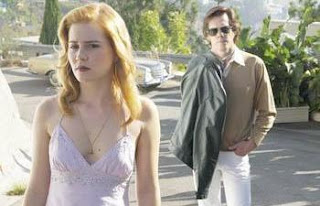 Where The Truth Lies is a seductive and wonderfully constructed mystery from director Atom Egoyan. Starring Kevin Bacon and Colin Firth as a Martin and Lewis-like duo and Alison Lohman as a writer trying to uncover their darkest secret, this is a very engaging and effective film.

The mystery at the center of the film has to do with the death of Miami college student Maureen (Rachel Blanschard), who is discovered in the New Jersey hotel suite of musical comedy duo Vince Collins (Firth) and Lanny Morris (Bacon) in 1957. Shortly after Maureen’s death, which officials deem an accidental overdose, the duo breaks up and their careers go into decline. In 1972, Karen (Lohman) is hired to write a book detailing Vince’s life and career for which Vince will be paid a million dollars on the understanding that Karen will be able to get to the bottom of how Maureen’s body ended up in his room and why he and Lanny broke up. Unbeknownst to Vince, Karen has a prior connection to him. After Maureen’s death – but before the discovery of her body – Vince and Lanny host a telethon for children with polio and one of the polio stricken children who participates in the show is Karen.

Karen is an interesting character, one who seems to openly court danger. After her first meeting with Vince, she meets Lanny on a plane. Since Lanny had previously refused her publisher’s request for an interview, Karen assumes the identity of her friend, Bonnie (Sonja Bennett), in the hope of getting him to confide in her. Inevitably, this lie comes back to haunt her when she finds herself faced with Vince and Lanny at the same time. Both men feel that she’s betrayed them, but Vince agrees to carry on with their project and later talks Karen into taking a couple of blue pills, a decision which will put her in a position to be blackmailed by him the following morning. There are many instances when she seems to be the pawn of an elaborate game, but she consistently puts herself in the position to be manipulated and trapped by the people around her. The question is whether it’s by accident or design.

I won’t go any further into the plot of the film because it’s so carefully crafted and manages the rare feat of not showing its hand too early, giving the audience just enough clues and information throughout the film to make the ending plausible, but also holding enough back to retain the element of surprise. The screenplay is the strongest part of the film and, unfortunately, there are certain respects in which the film itself fails the story. The performances by Bacon and Firth are excellent, and all of the actors should be commended for their willingness to really go there in a series of quite explicit sex scenes, but the central performance by Lohman is really lacking. I’m not familiar enough with Lohman’s oeuvre to offer an opinion on her as an actress in general, but in this film she comes across as extremely wooden and unnatural, which is a major problem for the film since she’s its main focus.

This is a great film. It's one of those provocative stories that everyone should check out for all the sordid twists and turns.