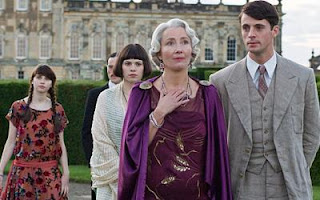 At best, Brideshead Revisited can be called a competent adaptation of the novel on which it is based. It hits on all the major plot points, touches on the major themes, but is ultimately lacking in vitality. It’s a beautiful looking film, to be sure, but it seems to have no spirit, which is ironic given how much time it devotes to exploring the issue of religion.

The story is related to us through the memories of Charles Ryder (Matthew Goode). When he was a student at Oxford he developed a friendship with Sebastian Flyte (Ben Wishaw), the eccentric son of an aristocratic family. Charles is charmed by Sebastian and they quickly become inseparable. It is fairly obvious that Sebastian is in love with Charles, though Charles’ own feelings are somewhat more ambiguous. During the summer holiday, Charles is invited to spend the summer at Brideshead, the home of Sebastian’s family. There he meets Julia (Hayley Atwell), one of Sebastian’s sisters, and Lady Marchmain (Emma Thompson), Sebastian’s mother. Later Charles will accompany Sebastian and Julia to Venice, where their father (Michael Gambon) lives in exile with his mistress (Greta Scacchi). During this trip, Charles’ affections shift from Sebastian to Julia, and a rift is created between him and the Flyte family. Years later, he and Julia will meet again, have an affair and plan to run away together, only to find that the same old obstacles – primarily Julia’s Catholic faith - are still standing in their way.

Towards the end of the film, it is stated a couple of times that Charles wants “too much,” and there’s a sense in which the film itself wants too much as well. It acknowledges that Charles’ great love is actually neither Sebastian nor Julia, but Brideshead itself and all that it represents to him. At the same time, though, it attempts to frame Charles’ relationship with Julia as the great love story, so that in essence the film is saying one thing but doing another. And even though it wants the thwarted love between Charles and Julia to be the driving force of the story, it doesn’t actually take much care in developing it. More time is given to Charles’ relationship with Sebastian than his relationship with Julia which is, in many respects, rushed through do to time constraints. It seems as if they’re only actually together for about five minutes before Julia’s Catholic guilt gets the better of her and she calls things off.

For the most part, the story unfolds in a languid manner, but life is breathed into it through the appearances of Michael Gambon as Lord Marchmain, whose screen time is brief, and Emma Thompson as Lady Marchmain, who absolutely dominates every scene that she’s in. As the overbearing matriarch of the Flyte family, Thompson renders a terrific performance and manages to buoy the film every time she appears on screen.

As the two principles, Matthew Goode and Hayley Atwell do what they can but, ultimately, Charles is a cipher and Julia apparently has no ability to make her own decisions, which means that neither character is terrifically compelling. Sebastian, who destroys himself with alcohol, is compelling and so is the performance by Ben Wishaw, but by the end he’s been marginalized and pushed aside in favour of the Charles-Julia love story and meditations on the question of faith. All in all, you get your money’s worth on the strength of the performances by Thompson, Gambon and Wishaw, as well as the film’s great production values, but there’s really no good reason not to wait for this to come out on DVD to see it.