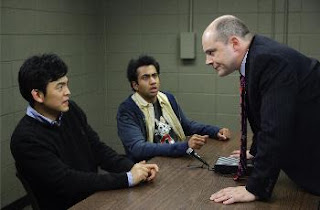 It probably says a lot about the surreal nature of the times in which we live that the film which engages most effectively with the war on terror is a stoner comedy. In certain respects, this makes absolute sense because this is the only mainstream film dealing with these issues which unfolds from the perspective of people of color who are, by and large, more intensely affected by the policies enacted to combat terrorism than the white protagonists who litter the film landscape. But, on the other hand, it remains a sad state of affairs when one of the more successful post-9/11 films mixes politics in equal measure with bodily functions.

Here’s the thing. There are few things I like more than a smart movie. But, that doesn’t mean I’m not capable of enjoying a dumb movie so long as it knows it’s dumb. There’s not much to say about the plot of Harold and Kumar because, like the first film, its story is structured in the manner of “This happened and then this happened and then this happened.” Both films are picaresque in nature, a series of skits unfolding one after the other. The fun of both is watching Harold and Kumar as they escape from a bad situation only to find themselves in one worse, only to escape again and find themselves in another bad situation. In this film, the two will be taken into custody during a flight to Amsterdam after a misunderstanding involving the word “bong,” be sent to Guantanamo Bay, escape and return to the U.S. via a Cuban raft, end up in Birmingham where they encounter an inbred Cyclops and a Ku Klux Klan meeting, reunite with Neil Patrick Harris, be shot at by angry hookers, be detained again and parachute into President Bush’s ranch. In revealing this, I’m not really giving anything away because this is a film that’s less about what happens, then the jokes that can be made from what happens.

As the two leads, John Cho and Kal Pen play off of each other very well and both are very likeable, which definitely helps in terms of keeping the film afloat, as does the pacing. The various episodes of the film are all well-timed, with none going on so long that all the humour is drained out of any given situation. How much you enjoy this movie will depend a fair deal on whether you’ve seen the original, as many elements refer back to the first film, but by and large the gags are funny enough that they work even without having seen the original.

To return to the political aspect of the film – and I’m surprised to find myself writing this about a movie where the primary goal of the protagonists is to get to Amsterdam and smoke legal weed – the reason this film works so effectively is that it’s balanced. Harold and Kumar are falsely sent to Guantanamo through a combination of racial profiling, misunderstanding, overzealousness, and a heightened sensitivity to anything or anyone who might be suspicious; but, while imprisoned they meet admitted terrorists. Rob Corddry appears as a government official who is enthusiastic about punishing people he sees as threatening to America’s freedoms, but who also won’t think twice about using the Bill of Rights for something unmentionable; but Roger Bart is also present as another government official who is along to point out all the ways Corddry goes wrong and lament the way that people like him have hijacked national discourse through knee-jerk us-or-them attitudes. It’s a dumb movie to be sure, but in its political components it presents more shades of grey than most films that aspire to be smart.

All in all, this is a funny movie. You’re life won’t be changed by having seen it, but it’s effective insofar as it achieves exactly what it sets out to, which is to entertain you without straining you intellectually.