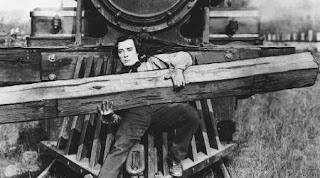 Genius. It’s the only word grand enough to describe Buster Keaton, but still manages to come up just a little short. What’s amazing about him in films is that even though you can see that a great deal of work is going into the set-up, he still manages to make the execution look effortless. The scope of his vision, the intricacy with which he constructs his story and the perfection with which it plays out, is simply staggering. Never before and never since has there been anyone like him. He was a man apart and, like him, his masterpiece The General stands apart from all other films.

I know a number of people who reject silent films outright due to the vague notion that pre-sound films are somehow inherently “boring” and such assertions always make me want to sit them down and show them The General. This is an exhilarating film not only because it features some great stunts and terrific moments of comedy, but also because it is plotted to perfection, telling its story in a brisk, symmetrical way in which every scene builds upon what came before so that your excitement is at peak level by the time the film reaches its climax.

Keaton plays Johnnie Gray, a Southern engineer who has been rejected from service in the Confederate army because he’s more useful to the South as an engineer. Of course, no one bothers to explain the reasoning behind his rejection to him so he can’t explain himself when everyone, including his beloved Annabelle (Marion Mack) assumes that he isn’t in uniform because he’s a coward. When his engine, The General, is hijacked by Union soldiers, Johnnie takes chase, first running after it, then employing a push cart, then getting hold of another train (but accidentally failing to bring along the car carrying the Confederate soldiers who want to help get The General back). Along the way from Confederate to Union territory, various schemes are employed by the Union soldiers to foil their capture, and by Johnnie to keep the Union soldiers from getting away. One of the best sequences involves Johnnie setting up a canon to fire at the other train, only to have circumstances first knock it out of position so that its aiming directly at Johnnie, and then have it so slow to detonate that it doesn’t fire until Johnnie is going around a bend so that the cannon ball clips the back of the Union soldiers' train, causing them to panic, convinced that a band of Confederate soldiers is chasing them rather than just an engineer who wants his train back.

The thing that stands out most about the film is the stunt work performed by Keaton. From the scene at the beginning when he sits on the side rod of the train and is gently moved up and down by the motion as he moves out of frame, to various scenes of him crawling around the moving train (especially the sequence where he climbs down the front to knock planks off the track in front of him), he performs some astonishingly dangerous feats. If made today, you would know that what you were watching wouldn’t be “real” and it would just seem like another cool effect, but Keaton really is doing these things and could easily have been killed. That he pulls all these stunts off with such comedic grace and perfection is a testament to his abilities as a performer. He makes it look so easy even though, obviously, it is not.

What elevates this film, and Keaton in general, to the level of genius is the scale of ambition. This isn’t a film that is content to simply connect a series of comedic and physical set-ups, but instead gives an equal amount of time to developing the story and then executes it in a way that is technically very strong. The chase sequences are constructed symmetrically, so that what we see the Union soldiers doing as they escape back to their territory, we see Johnnie and Annabelle repeating as they flee from Union territory back to their own. And while all these train hijinks are taking place, we see the movements of the Union and Confederate armies in the background, alternately advancing and retreating.

The timing of this film, both in terms of plot movement and comedy, is perfect. By virtue of the fact that they’re both geniuses of the same era of filmmaking, Keaton and Chaplin are often compared, which is like comparing apples to oranges. Both are deft physical comedians, but they have such different styles and get their laughs in such different ways. Chaplin is the clown, Keaton is the everyman; Chaplin mugs, Keaton shrugs. Both are great, but they’re so very different. The comedy we get from Keaton here is both simple (as in the scene at the beginning where he walks to Annabelle’s house with two young boys behind him, unaware that Annabelle is also walking behind him until he gets up to the door and knocks) and more intricate (as in the sequence towards the end where a Union soldier picks off the Confederates around a cannon one by one, much to Johnnie’s confusion and then, just when it seems as though it’s Johnnie’s turn, the Union soldier is accidentally killed when the blade of Johnnie’s sword goes flying off its hilt).

The General is a terrific film on both technical and performance levels. It’s funny, it’s exciting, and it unfolds at a quick pace. I highly recommend it to anyone looking to make their first foray into silent films because it’s so very accessible, so fast and full of action that you don’t really even notice that it’s free of dialogue. It is every inch a masterpiece.