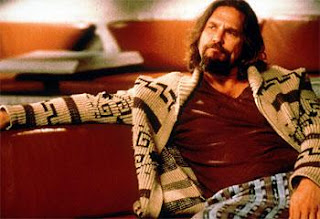 A kidnapping gone awry, a bungled ransom drop, a cast of peculiar characters, and appearances by Peter Stormare and Steve Buscemi – sound familiar? Not quite. The Big Lebowski is the polar opposite of Fargo, as light as the other is dark, as funny as the other is tragic. With a keen eye for absurdity, writers/directors Joel and Ethan Coen deliver a film that is truly one of a kind.

The Big Lebowski begins with Jeff Lebowski, known to all as The Dude (Jeff Bridges) being mistaken for a millionaire also named Lebowski, whose wife is in debt to a pornographer. Two guys show up at Lebowski’s abode, rough him up, and ruin a rug before realizing that they’ve got the wrong guy. After relating his tale to his friend, Walt (John Goodman), The Dude is convinced to go to the Big Lebowski and ask for compensation for the rug, which he receives by simply taking one of the rugs in Lebowski’s mansion. Shortly after their meeting, Mrs. Lebowski (Tara Reid) is kidnapped (or perhaps not) and The Dude is recruited to act as a courier to deliver the ransom. The money is lost when The Dude’s car is stolen, a toe is sent to Lebowski as a means of encouraging him to deliver the money, and people keep showing up at The Dude’s demanding answers. The plot of the film is kind of nonsensical and a little meandering, which would bother me were it not for the fact that I think the story is being told this way intentionally. I mean, if a stoner was trying to relate this story to you, including the subplots involving him getting Lebowski’s daughter, Maude (Julianne Moore) pregnant, and his bowling team’s quest to win the championship, you wouldn’t expect it to be entirely cohesive nor would you expect all the threads to tie up nicely.

There are a lot of quirky characters in the film – as there tend to be in all the Coens’ comedies – and a lot of truly bizarre moments (and I mean that in the best possible way). Walt is a Vietnam vet with anger issues who constantly steps in to help The Dude, but only manages to make things much, much worse each and every time; Maude is an artist with a penchant for flying over her canvas, flicking her brushes Jackson Pollack-style; the alleged kidnappers are a trio of German nihilists who don’t quite seem to understand why they shouldn’t get the ransom even if they don’t have Mrs. Lebowski – The Dude, himself, is actually the most normal of the bunch.

As The Dude, Bridges delivers a really well-realized characterization of a guy who always seems like he’s this close to expressing some great thought, but fails because his brain and his mouth are out of step with each other and because his ideas, once thought, drift away and can never again be recovered. Bridges isn’t an actor I’ve ever gone out of my way to see, but I’ve always found that movies he’s in are better for the fact that he’s in them. He’s a very naturalistic actor and slips so completely and easily into his roles, which is maybe why he’s never really been given as much credit as he deserves. The presence of Bridges, more than anything else, really grounds the film and keeps it from going too far over the top.

Jeff Bridges really does make the film. He carries it on his shoulders for being in every scene, except one. he personally loved playing the role and loves the cult status the movie has achieved. Besides, how many Oscar nominees take roles in comedies? Good ones, anyways...

Not exactly a lightweight.

Bridges is definitely one of the more underrated actors out there.