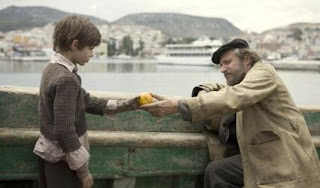 Jeremy Podeswa’s Fugitive Pieces is a lyrical and moving treasure of a film. Narratively elusive, it examines both the power and the fragility of memory, its characters haunted by what they remember – and what they’ve forgotten – as they attempt to reconcile the past to the present. Wonderfully crafted and beautifully brought to life both in front of and behind the camera, this is an absolute must-see of a movie.

The story centers on Jakob, played as a boy by Robbie Kay and as a man by Stephen Dillane. As a boy in Poland, Jakob is the only member of his family to escape the Nazis, watching from his hiding place as his older sister, Bella, is dragged away by soldiers. He’s eventually found by Athos (Rade Serbedzija), a Greek geologist who takes him to the island of Kefallonia and keeps him safe for the duration of the war. Athos becomes an anchor in Jakob’s chaotic life, a man who is gentle and protective, extraordinary for the way that he unflinchingly performs tasks which, in different circumstances, would be ordinary but during the Nazi occupation put him directly in danger. At war’s end, the two emigrate to Canada, where Athos has been offered a teaching position.

Jakob grows up, becomes a writer, marries and divorces then marries again, all while attempting to reconcile his first life to his second. Every new experience and each new language he learns (first Greek then English), seems to erase part of his past and drives him to record his memories before they can be lost. Over time he begins to realize that he can’t fixate on his past and that he must begin to let go. The catalyst for this realization is the relationship of his neighbour, Jozef (Diego Matamoros) to his son, Ben (Ed Stoppard). Jozef and his wife are concentration camp survivors whom Jakob will know for most of his life, becoming in a way a member of their family. Throughout his childhood, Ben seeks refuge in the apartment of Jakob and Athos, clinging to Jakob when it’s time to go home. Jakob sees how hard Jozef is on his son, berating him for throwing away a half-eaten apple (“Our son doesn’t know the value of things,” he laments to his wife, then questions why they lived if their son can’t understand how precious half an apple would have once been to them). The past has taken its toll on Jozef and Jakob, but they aren’t the only ones who suffer. Those who love them often bear the brunt of their memories.

The story unfolds in a non-linear, fragmented way, with past and present weaving in and out of each other across the delicate links of memory. Some of the most moving sequences of the film are simply images unfolding as Jakob’s voice-over reveals the contents of his writing. Generally speaking, adaptations that rely on voice-over narration come across as somewhat weak to me, denoting a filmmaker too in love with the novelist to make the work their own. However, in this particular case, I wasn’t bothered by it at all, partly because the story is told in such an intensely personal way that it seems wholly appropriate, and partly because the prose itself is simply so beautiful.

This is a really wonderful movie, a haunting meditation on how our past shapes our present even as our memories begin to elude us. This is the first masterpiece of 2008.

I have to see this one!