99 movies down and only one selection left, this spot reserved for the absolute best movie ever made (by which, of course, I mean my favourite). Drum roll please... 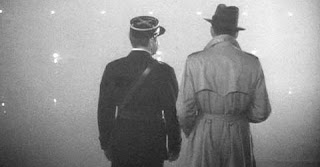 You must remember this, the enduring tale of love and sacrifice, of wartime politics and subterfuge, noble men and scoundrels, and Rick’s Cafe Americain – the original bar where everyone knew your name. Casablanca is a movie with a little something for everyone, a thoroughly satisfying film for the romantic and the cynic alike.

Whether you’ve seen the film or not, the plot ought to be familiar to you: Casablanca, located in French Morocco, is one of the stops along the way for those wishing to flee the Nazis and take refuge in the US. Rick’s Cafe Americain is the local hot spot, owned by Rick Blaine (Humphrey Bogart) and frequented by Captain Louis Renault (Claude Raines) and black market dealer Ugarte (Peter Lorre) amongst scores of others waiting and plotting their escapes from Casablanca. There are three new arrivals in Casablanca: the German Major Strasser (Conrad Veidt), Victor Laszlo (Paul Henreid) and his wife, Isla (Ingrid Bergman). Strasser has come to ensure that Laszlo, a resistance figure and concentration camp escapee, doesn’t make it to America. Laszlo and Isla were meant to get the letters of transit which would allow their escape through Ugarte, who is arrested before he can sell them but not before he can give them to Rick for safe keeping. When Laszlo and Isla come to make the deal, Rick is confronted with his past, having loved and lost Isla in Paris. Now Rick, who until now has been determined not to stick his neck out for anybody, must decide whether it’s worth it to put himself in danger to help Laszlo, and Isla must decide what she’s willing to sacrifice (or not, depending on how you look at it) to ensure that Laszlo gets out of Casablanca.

Casablanca is about a lot of things, but it seems to me that above all else, it’s the story of desperation. The people in Casablanca are all desperate to get out, to get on to the States, and one of the film’s subplots involves a woman who agrees to a liaison with Renault in exchange for his agreeing to help her and her husband to flee. Laszlo is desperate to escape the Nazis and continue his work. Rick and Isla are desperate in their love for each other – but each is also desperate for something else, too. Isla wants to make sure that Laszlo is able to continue his work, for which she admires him so greatly, and Rick, despite his hard shell and his roguish pose, wants to do the right thing.

Isla’s relationships with Rick and Laszlo are, of course, the central focus of the story. Isla loves Rick, but worships Laszlo, whom she had thought was dead when she and Rick met in Paris. In certain respects, Isla is an empty character, an object to be bartered over by the two strong male figures who will determine her fate, but in the hands of the luminous Bergman, the character is given depth and dimension. Henreid, as Laszlo, has a role that ought to be thankless – the spotless hero and cuckold – but he, too, makes more of it than what is present on the page. There is a great scene early on when Laszlo and Isla discuss all the times when they might have gone their separate ways but instead stayed together, that demonstrates why Laszlo is a legitimate rival for Rick, rather than just a device of the plot.

Bogart has the film’s best role (though Raines runs a close second as the shady but ultimately sentimental Renault) as a man who puts on a tough show, but is really a romantic on the inside. He’s quick to tell people that he’s out for number one, that he cares about himself and himself alone, but what he consistently shows is that he cares a great deal about other people and wants to help them. Sure, he doesn’t lift a finger to help Ugarte when Renault decides to round up “the usual suspects” in an effort to track down those two missing letters of transit, but he does help the woman who was willing to prostitute herself to Renault by ensuring that her husband wins big at the roulette table, and he has a history of fighting the good fight, even if he does insist that he only did it for the money. Further, when he’s making plans to sell the cafe, he makes sure that his employees will all be well taken care of. Rick is a really well-rounded character and through the course of the film he truly earns the right to make that great and selfless speech to Isla, the one about three people whose problems don’t amount to a hill of beans in the grand scheme of things.

From a technical point of view, the film is perfectly crafted, unfolding at a brisk pace, without ever taking a wrong turn, without a single moment that is out of place. It’s one of the most quotable movies I’ve ever seen (from “Here’s looking at you, kid” and “We’ll always have Paris” to “We haven't quite decided yet whether he committed suicide or died trying to escape,” hardly a scene goes by without at least one priceless line) and its story is compelling, as demonstrated by the number of times it’s been cribbed by other films, television shows and stories. There isn’t a second of this film that I don’t cherish and adore. To me, this is absolutely and without a doubt, the best movie ever made.

Posted by Norma Desmond at 6:07 PM

But what will you do now? Time for an extended blogging break?

A break? Yes. "Extended"? Well, that depends on your definition of the word.