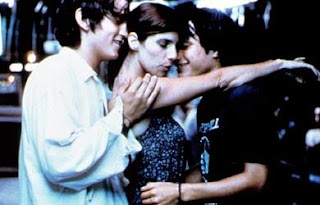 Y Tu Mama Tambien plays on a number of levels. On one level it’s a teenage sex comedy (sometimes drama). It’s also a road movie. It is also, and perhaps most importantly, a subtle exploration of a nation divided against itself by the politics of poverty. This is a film that is at times funny, at times sexy, but ultimately bittersweet in the way that it explores the ways and means that people come together and, eventually, come apart.

The film is well known for its nudity and sex scenes. It begins with Tenoch (Diego Luna) and his girlfriend engaging in an energetic tryst during which they discuss all the people of various nationalities that they won’t be unfaithful with while she’s on a trip out of the country. Soon after, there’s a scene between Julio (Gael Garcia Bernal) and his girlfriend, who is also going on the trip, that is similar in tone and energy. With their girlfriends gone, the boys settle into typical teenage ennui, living lives where nothing really happens. They attend a wedding where they set their sights on Luisa (Meribel Verdu), an older and married woman. They try to interest her in a trip to a secret beach, but she politely declines. Later, when she learns of her husband’s latest affair, she decides to take the boys up on their idea, and the three embark in search of Boca del Cielo.

Like most road movies, the film isn’t as concerned with the destination as it is in what happens to the characters as they get there. Tenoch and Julio reveal their “code” to Luisa and tell her about their sex lives. She’s less than impressed and tells them that she feels bad for their girlfriends, who have to endure them. At one of the stops along the way, she invites Tenoch into her room. He seems surprised, but she points out that this was the whole purpose of her being invited on the trip in the first place. The next day when things become tense between Tenoch and Julio, Luisa warns Tenoch not to get full of himself – it could have just as easily been Julio in her room. She proves it, then, by having sex with Julio. The situation with Luisa is always threatening to erupt and secrets are revealed in anger which leads to more strife. Tenoch and Julio learn that each has been sleeping with the other’s girlfriend and their friendship begins to disintegrate.

Beneath the ever-heightening sexual tension is a tension of another kind. The film is quick to establish a difference in social ranking between Tenoch (who is upper class, the son of a statesman) and Julio, which it explores further as the film goes on. It also explores the divide between the rich, touristy version of Mexico and the poorer side of Mexico that the threesome encounter at various stops along the film. These moments are brief, commented on by the narrator but, tellingly, hardly even noticed by the three protagonists. At the beginning of the film Tenoch and Julio’s life is marked by their boredom and when they decide to make the trip, they have to track down Julio’s sister to borrow her car. She’s participating in a rally which appears to be rather large. Tenoch and Julio have nothing to say about it, nor its purpose, and it fades from their minds as soon as they get the car. Their wilful ignorance of the political situation that surrounds them is an interesting commentary on a general lack of political awareness in the rising generations. They are aware, vaguely, of the problems but don’t see themselves as part of the solution. Their lives are complete and separate from what’s going on in their own backyards.

The performances in the film are very good. Luna and Bernal both find the right mixture of cockiness and underlying uncertainty to make their roles wholly believable. The standout, however, is Verdu as the woman determined to teach these boys something about life. There is a wonderful scene in which Luisa calls her husband, informs him that she’s aware of his affair and has left for good, then tearfully reminds him to take care of himself now that she won’t be there to do it for him. It’s a brief but powerful scene, one of many in which the character becomes fully human and not simply a device of the plot. All three characters are, in fact, very real and it is a credit to the performers and the filmmakers that the characters are not muted by all the sex in the film, but rather become more clearly defined through those scenes. Y Tu Mama Tambien is a film that is memorable not because of how much flesh it shows, but because of how deeply it goes beneath the superficial level of skin to the souls of its characters.

Posted by Norma Desmond at 6:33 PM