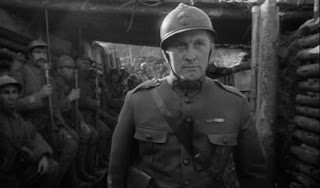 Paths of Glory is an angry, powerful condemnation of the way war is fought away from the battlefield. It doesn’t argue against the necessity of war as much as the mentality of war, where one man’s heroism can be determined by the sacrifice of others, and morale can be built through the execution of one’s fellow soldiers. The story centers on three such soldiers, chosen more or less at random, to be executed for cowardice to teach everyone else a lesson, and one man’s doomed crusade to save them. In a simple, straight-forward way, director Stanley Kubrick captures the insane, heartless quality of war in a way that you’ll never forget.

The film begins with General Mireau (George Macready) being assigned the impossible task of taking a well-defended hill. His superior, General Broulard (Adolphe Menjou) believes that the success of the mission would raise the army’s morale in general, but Mireau knows that it is a suicide mission destined for failure. However, when Broulard suggests that a promotion would be in order were the task a success, Mireau jumps on board and goes to the trenches to give the order to Colonel Dax (Kirk Douglas). Dax attempts to talk Mireau out of it, using the same arguments that Mireau employed with Broulard, but to no avail. The attack goes forward and is, of course, a failure. When the men attempt to retreat to their trenches, Mireau orders his artillery to fire on them. This monumental disaster cannot be allowed to go unpunished and Mireau decides to execute one member of each of the three companies for cowardice (a reasonable figure considering he originally wanted to execute 100). One man is picked because his senior officer has a personal vendetta against him, another is picked for being a social “undesirable,” a third is picked after having drawn lots. Somehow, this is meant to be justice.

The trial, in which Dax attempts in vain to defend the three soldiers, is a mockery. The basic argument of the military is that if the men weren’t cowards, they would be dead. The fact that they’re alive proves that they weren’t brave enough to leave their trenches. Dax defends them as best he can, given that he isn’t allowed to bring in any evidence to support the soldiers claims that they aren’t cowards, but it’s ultimately pointless. The court has decided that the three will be murdered and that’s all there is to it. “Gentlemen of the court, there are times that I’m ashamed to be a member of the human race and this is one such occasion,” Dax says angrily at the end of the trial. But even worse is yet to come. While the three are awaiting execution, two get into a fight in which one sustains a head injury that leaves him incapacitated and on the verge of death. He’s carried out on a stretcher and tied to the execution post, his death all the more pointless for the fact that he is, essentially, already dead.

But they aren’t the only casualties. The questions that Dax has raised – especially those regarding Mireau’s orders to shoot on his own men – cannot be ignored and now it’s Mireau’s turn to play scapegoat for Broulard. Broulard informs Mireau that he’ll be investigated and then congratulates Dax on what he sees as a masterful move to usurp Mireau’s position, completely misreading Dax’s character. When he realizes his mistake, he’s disappointed, branding Dax an idealist rather than a strategist. “I pity you as I would the village idiot. We’re fighting a war, Dax, a war that we’ve got to win. Those men didn’t fight, so they were shot. You bring charges against General Mireau, so I insist that he answer them. Wherein have I done wrong?” “Because you don’t know the answer to that question, I pity you,” Dax replies.

The army depicted here is basically an extension of the social/class hierarchy existing outside of the service. Officers like Mireau and Broulard would be members of the upper classes (we see evidence of this with Broulard, whom Dax confronts at a ball), while ordinary soldiers like the three who were executed would have come from the lower social classes. The way that the ordinary soldiers are treated as being not only undesirable in a social sense, but also disposable, at the mercy of what their being allowed to live will gain for their superiors, is what so disgusts Dax, who is caught somewhere in the middle. He’s not a regular soldier, though he does participate in the charge towards the hill, but he lacks the mentality to fit in with fellow officers who see nothing but their own potential for glory, while losing sight of the humanity that surrounds them.

The final scene of the film further emphasises the way that war drains humanity from the people who participate in it. The soldiers have gathered together in bar, where the owner brings out a captured German woman to entertain them. She begins to sing, obviously scared and confused, while the soldiers howl and catcall to her. She’s not a human being, but an enemy, at least until they begin to recognize the song and their howling segues into humming, their lustful looks into looks of sadness. A common thread has been touched between these French soldiers and this German girl, all of whom are victims of something beyond their control. Dax, watching from outside, allows his men to have their moment before giving the order to return to the front. It’s a simple scene, but deeply effective, perhaps even more so than any of the scenes that came before it, including the battle scenes and the executions, and it perfectly captures the essence of the film as a whole.

Posted by Norma Desmond at 6:10 PM