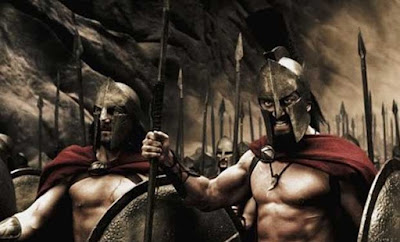 Blood. Abs. Scenery, thoroughly chewed. This is history as seen through the eyes of Frank Miller and Zack Snyder, two artists who for a hot minute 10 years ago had some people convinced that they might be visionaries, but who have since been brought down to earth by proving to be, respectively, a one-trick pony (at least in terms of his work in film) and the man who has made Ben Affleck depressed about playing Batman. 300 was definitely a landmark film in terms of a certain visual style that spawned many imitators (though one might argue that it merely continued the work started by Sin City), but with all that imitation comes a watering down of what was once so impressive. Without that shock that comes from seeing something visually exhilarating, is there anything left to recommend 300?


The View From 2007
The Good: "In epic battle scenes where he combines breathtaking and fluid choreography, gorgeous 3-D drawings and hundreds of visual effects, director Zack Snyder puts onscreen the seemingly impossible heroism and gore of which Homer sang in The Illiad." - Kirk Honeycutt, Reuters

The Bad: "300 is about as violent as Apocalypto and twice as stupid. Adapted from a graphic novel by Frank Miller and Lynn Varley, it offers up a bombastic spectacle of honor and betrayal, rendered in images that might have been airbrushed onto a customized van sometime in the late 1970s." - A.O. Scott, The New York Times


The View From 2017
If there’s one unreservedly positive thing that can be said about 300, it’s that it has a good sense of flow. It establishes the context of its story efficiently and gets to the “goods” as quickly as possible, flowing in and out of battle scenes and breaking those sequences up with scenes which take place back at Sparta, where Leonidas’ Queen, Gorgo (Lena Headey), attempts to sway the Spartan Council to send reinforcements to Leonidas, as well as scenes in which the Spartan-born hunchback Ephilates (Andrew Tiernan) betrays the Spartans in order to align himself with Xerxes. 300 moves easily between story/exposition and violent, bombastic action, and whatever else you might say about the movie, it’s not boring.

That said, it is awfully repetitive, with action scenes unfolding in two modes, slow motion and fast motion, and expository scenes unfolding in similar fashion, with characters alternating between bellowing and speaking in hushed tones. Moreover, time has not been particularly kind to it, not only because (through no fault of its own) the strategy for unfolding the action scenes now seems entirely derivative because of the number of films that copied it, but also because the film’s color palette is so drained of, well, color, making it look muted and unattractively washed out, and because of the effects, which at the time of its release played as exaggerated for a stylistic purpose, but now just look kind of cheap (and you really can’t say that that’s merely the price of the way that technology is advancing by leaps and bounds, because the effects in Jurassic Park still hold up and that movie is 24 years old).

300 offers a great deal of spectacle, but it’s an empty spectacle. At the time it was released, the question of whether it was meant to be an allegory about the contemporaneous situation in Afghanistan and Iraq was much debated, with the film’s depiction of Xerxes and the Persians as decadent, depraved, deformed, and effeminate – everything that the hyper masculine Spartans are not – singled out for criticism for its aggressive “othering,” which in the context of the time might be read as propagandistic. If 300 were made today, I suspect the debate would center on whether it’s an allegory for the current political division in the United States. What I mean by that is that the film is so thematically simplistic, that it approaches things like violence/war, politics, sex, masculinity, and culture with all the sophistication of a 12 year old boy whose only exposure to the world outside his door comes via Grand Theft Auto, that it could be bent to suit just about any argument about what it “means.” It could mean anything, which ultimately means that it means nothing, because that’s the kind of filmmaker that Zack Snyder is.

This isn’t to say that one can’t enjoy 300; it’s entertaining enough in a “turn off your brain” kind of way, but viewed in 2017 it seems less like a classic of its kind than a relic of its era. Though I’m sure that “This. Is. Spar-taaaaaaaaaaaa!” will live on in perpetuity.
Posted by Norma Desmond at 8:00 AM