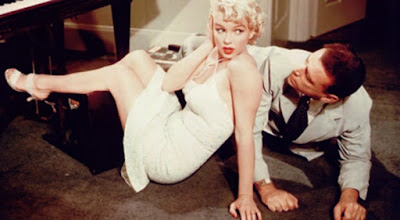 If I had to define the difference between a movie star and a movie icon, I would argue that a movie star is someone that people are familiar with because of their movies, while a movie icon is someone with whom a majority of people are familiar because of isolated moments and images from their movies. Everyone knows the image of Marilyn Monroe standing over the subway grate, but outside of film buffs, Monroe fans, and Billy Wilder fans, how many people who know that image know what film it comes from? And if they can name the film, can they describe the context of the scene? The moment is bigger than the movie, having taken on a life of its own in the 62 years since the film's release, and in the popular imagination it's now considered less a moment from a film than it is a part of Monroe's identity. If most people are only familiar with the subway grate scene in isolation, and not from having seen The Seven Year Itch, that's kind of a shame because the film is a highly entertaining farce - even if it works for precisely the reason that Wilder felt it ultimately didn't.

The Seven Year Itch begins with a bit of a test for a modern viewer as it opens with a prologue that the film's narrator admits has pretty much nothing to do with the plot and which is, to put it nicely, kind of fucking racist. The actual story centers on Richard Sherman (Tom Ewell, reprising the role he played on Broadway), a publishing executive whose wife and son have gone off to Maine for the summer in order to escape from the sweltering New York heat, joining the mass exodus of wives and children from the city for the summer months. Unlike many of the other husbands around him, Richard isn't looking to use his time alone to chase women, but temptation quickly presents itself when he gets back to his apartment building and meets the woman (Monroe) who will be renting the apartment of his upstairs neighbors for the summer. Drawn to Richard by the revelation that his apartment has air conditioning, the neighbor begins spending a lot of time with him in order to escape the unbearable heat of her own apartment, prompting Richard to worry about whether he's going to have an affair with her or remain faithful to his wife.

Decades after the fact, director Billy Wilder lamented that the film just didn't work because censorship prevented the husband from going ahead and having an affair with the neighbor. Far be it for me to disagree with one of Hollywood's all time greats, but he couldn't be more wrong. The fact that Richard doesn't sleep with the neighbor is exactly what makes this work. If they sleep together, it completely undermines everything that the story has been doing up until that point. Officially, the premise of the story is that after seven years of commitment, monogamy begins to lose its appeal, but if you watch the film, it's actually very much a story about a man who is coping with his midlife crisis by escaping into delusion. Consider the scenes near the beginning, when Richard imagines a conversation with his wife (Evelyn Keyes) in which he insists that she's lucky he's such a stand up guy because women are constantly throwing themselves at him (depicted in fantasy sequences that are hilarious for the kind of passive resistance that Richard imagines himself employing against the woman in any given scenario), and he can't do anything to stop it because he's just so charismatic and so attractive. In actuality, Richard is about as bland and lacking in charisma as a man can be and his assurance to himself that he looks just as he did when he was 28 and will probably continue to look that youthful and virile until he's in his 60's is laughable, all the more so because in the same breath he declares that his wife, who is not yet 31, is on the verge of losing her looks and is probably feeling pretty anxious about how his looks are holding up - not his fault, he insists, men just age better.

Then along comes the Monroe character and Richard becomes instantly smitten with her and creates a situation where he's constantly inviting her to come over to his apartment and then projecting his own infatuation on to her and telling himself that no matter what she's thinking, he's not going to let her seduce him. What's so funny about The Seven Year Itch is that Richard is constantly telling himself that it's not going to work, that she's not going to get him into bed, while getting him into bed is not even on her radar at all. She likes hanging out at his apartment because it's got air conditioning, and she likes him as a person because he's basically a nice guy, but the one time he actually does try to make a move on her, it's rebuffed completely. From her perspective, sex isn't even on the table, yet from his perspective he's shown remarkable restraint and will-power in not sleeping with her (even though he does, in fact, try to get her into bed). That chasm between how Richard sees himself and the situation and how Richard is actually seen and what the situation actually is, is what makes this movie so funny. If the two characters actually slept together, it would completely undermine all of that and turn it from a story about a middle-aged man's fantasy of himself into pure fantasy.

The Seven Year Itch is a pretty solid farce and Monroe delivers a strong comic performance as a woman who is so desensitized to her effect on men that she doesn't even seem to recognize that doing things like telling a guy that her underwear is in the ice box or asking him to fasten the straps on her dress might be provocative. The most surprising thing about The Seven Year Itch, however, is that it didn't result in Ewell having a bigger film career. He has many of the same qualities that made Jack Lemmon so successful, and he's so endearing a performer that you like him even as he's making a fool of himself. That inherently likable quality goes a long way towards carrying The Seven Year Itch, because the movie wouldn't be nearly as much fun if he came off as an irredeemable jerk (and given that at one point he basically assesses himself as a permanent 10 and his wife as a 6 about to fall off the cliff and become a 5, "jerk" is probably a nice word for how the character could come off if played by a different actor). The Seven Year Itch may be immortal for one particular moment, but it's a film that's more than the sum of that one part, thanks to Monroe and Ewell.


Up Next: Some Like It Hot
Posted by Norma Desmond at 8:00 AM