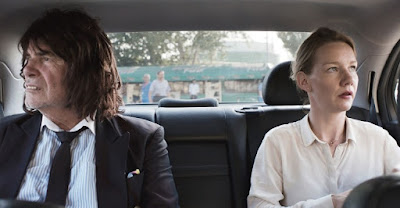 There are things about Toni Erdmann which, sight unseen, might seem daunting. It's a non-English language film, which is a dealbreaker for a number of people. Don't let that be a deterrent - a sizable portion of the dialogue occurs in English, surprisingly enough. It's two hours and forty-five minutes long, a positively unseemly length for a film that bills itself as a comedy. Believe me, you won't feel it. It starts a little slow but once it builds up steam, it zips by. Paramount is already gearing up to remake the film with Jack Nicholson and Kristen Wiig. Don't wait for it, see the original first. Not only is this movie brilliant and unrestrainedly bizarre, it is genuinely very funny. I honestly cannot remember the last time I saw a movie with scenes so outrageously funny and surprising that people in the audience literally shrieked with laughter, but that happened when I saw Toni Erdmann. Seriously, just see it.

Toni Erdmann is the story of a father and a daughter. The father is Winifried (Peter Simonischek), a rumpled music teacher who has never met a moment that he feels couldn't be improved by a joke or a prank. The daughter is Ines (Sandra Huller), a business consultant who is as uptight as her father is laidback and who is currently working in Bucharest, her life consumed by her job as she pursues a promotion that would see her transferring to Shanghai. When Winifried decides to take a spontaneous vacation to visit her, having previously joked to her that she so seldom calls or visits that he's had to hire a substitute daughter, his presence temporarily derails her as he gains the attention of the client that she's in the process of pursuing and just generally annoys and embarrasses her with his love for slipping a fake pair of teeth into his mouth whenever things threaten to get serious. When he gets into a taxi to go to the airport and then back home to Germany, she's relieved and looks forward to things getting back to normal. Little does she know that while her father has left the proverbial stage, it's only so that he can return as Toni Erdmann, the alter ego he's created with the assistance of a bad wig and those fake teeth.

Written and directed by Maren Ade, Toni Erdmann is a film that wears many hats. It's a story about a lonely man who wants to spend some time with his daughter and doesn't know how to connect with people except by trying to make them laugh. It's also a story about a woman whose life is full of stress and whose father's attempts to get her to lighten up just makes her feel more stressed out (though his presence is also convenient for the way that it allows her to blame everything that goes wrong on him, even though many of the things she gets mad about aren't his fault at all). And it's a story about how that woman feels isolated in her male-dominated profession and frustrated by the vast array of sexist bullshit she has to navigate in virtually every interaction. The client that she wants so desperately to impress finds value in her not for her professional achievements, but for her assumed ability to direct his wife to a good place to go shopping (and then to spend three hours shopping with her on her day off). Her boss keeps dangling the possibility of going to Shanghai in front of her, only to yank the proposed promotion away from her every time she reaches the goal he's set, essentially telling her to stop whining and be a team player while denying that he made the promise in the first place. She's interrupted by male colleagues who think they can finish her thought and say what is, in fact, entirely opposite to what she was about to say. Her assessment of the situation that she's been put in charge of is second-guessed by her superior, but if it blows up because he won't let her do what she thinks is necessary, the failure will still be hers to own. So if Ines is wound a little tight, she's got a wealth of reasons to be.

The story that Toni Erdmann tells rests on this very serious spine, rooted in very real issues, and in certain respects it could be called a film about a woman dealing with depression (there are many ways one might describe Ines at any given moment - "annoyed," "exasperated," and "stressed" immediately come to mind - but by the time she's quietly crying while nestled into the corner of a couch in the middle of a club, "depressed" begins to seem like the most appropriate), but so much of what happens is so gloriously absurd that even with these serious elements, it's difficult to walk away from it without considering it a comedy. As Ade steadily builds the comedy, having Winifried engage in these small, mildly goofy pranks (though the one that opens the film is somewhat elaborate, given that it's created on the fly) that become part of the fabric of any given scene, it grows to the point that every scene brims with anticipation that something outrageous is about to happen - even something as simple as a knock on the door started a string of anticipatory giggles from the audience I saw it with - and then the film explodes. It happens in two scenes, each brilliant in its own way, neither of which I want to spoil. I'll merely say that the way that they act together feels like a valve being opened and letting all the tension surge away.

Much of the credit for the film's success belongs to Ade and her careful control of the tone and pacing (yes, it turns out that a 2 hour and 45 minute comedy can be praised for its pacing), but that credit is certainly shared with Huller and Simonischek, each of whom brings wonderful contours to their respective characters. Winifried is a man who wants to make people laugh and not take things quite so seriously, though even when he's joking he himself seems melancholy, and at a key moment he tosses out his own advice that you have to be in the moment otherwise it's just passing you by, and Ines is a woman who is so consumed by the responsibilities of her work and by her ambition that if she pauses, even for a moment, the flood gates open into despair or, towards the end of the film, a total lack of inhibition. The relationship that's expressed between the two characters, who don't really understand each other but love each other enough to try to find some common ground, is complex and disarming and often fascinating as it plays itself out in a variety of scenarios, some very silly, some very solemn, some residing somewhere in between. If the remake can capture even half of what makes this film so special, it should be considered a success.
Posted by Norma Desmond at 8:00 AM