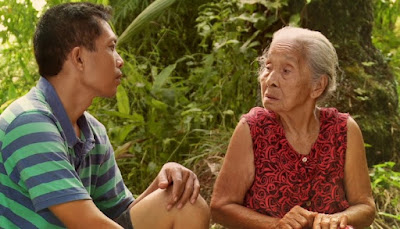 Taken separately or together, Joshua Oppenheimer’s documentaries The Act of Killing and The Look of Silence are the most intimate look at the banality of evil ever captured on film. Taking as their subject the Indonesian killings of 1965-66, a purge that resulted in the deaths of between 500,000 to 1 million people, the films go right to the source, with the first getting some of the men who carried out the killings to describe in detail what they did, where they did it, and how they did it, and the second following the efforts of a man whose brother was a victim of the purge as he attempts to get the families of the killers to acknowledge the evil that was done to his family by theirs. They are not easy films; they are often chilling, they are sometimes sickening, and they are ugly for what they reveal about humanity and how easily brutality can become normalized and embraced by a community. The Look of Silence is an enormously powerful film, the kind that makes an immediate and lasting impact.

In The Act of Killing, Oppenheimer made his presence keenly felt, even though he remained unseen by his cameras; it was a story that he was telling, with the subjects frequently addressing him directly and by name. In The Look of Silence Oppenheimer adopts a more arm’s length position, standing back and allowing his subject, an optometrist named Adi, to take the lead as he investigates the circumstances of his brother’s murder. Although the purges took place 50 years ago, there is a sense of danger to what Adi is doing, his questions met largely with hostility and/or denial and sometimes with veiled threats. Because the government is still rife with people who participated in the purge or who are connected to those who participated, Adi’s campaign could have dire ramifications, but he is driven to carry forward despite that risk. What he wants is a public acknowledgement from the perpetrators about what they did, not because he wants revenge or even because he expects that they would ever be punished for it, but as a means of forcing the killers to admit that his brother was a human being and not a piece of refuse that they disposed of, and as a means of setting the record straight. When he speaks to his son, he’s reminded of the government’s continuing campaign of propaganda and obfuscation of the truth that has been made possible by the conspiracy of silence and unchallenged ignorance that have taken root in the communities where the purges were carried out.

As part of his investigation, Adi speaks to the now elderly members of the local death squad, to politicians, and to the relatives of death squad members, confronting them calmly and not with anger, though anger is sometimes the reaction he receives when he reveals that his brother was one of the victims of the purge. Of all the things that make The Look of Silence so absorbing, the most fascinating is the mental gymnastics performed by the people that Adi interviews as they try to justify their actions and the actions of their family members and make themselves appear as blameless as possible. In what becomes the film’s most powerful scene, Adi visits with a member of the death squad and his daughter, the daughter revealing that as a child she was proud of the fact that her father played an active role in ridding the country of Communists. She’s very matter of fact about her feelings, betraying no regret or embarrassment, but when her father begins describing some of the things that he did – including collecting the blood of victims in a glass and the drinking it, believing that the only way to kill a person without going crazy was to ingest their blood – the camera focuses on her face as she’s listening, her expression becoming frozen in discomfort and horror. When Adi then reveals that his brother was a victim of the purge, both the man and the daughter are stunned into a momentary silence and then the daughter begins making excuses – that she didn’t know anything about the purges, even though she had just acknowledged it as a source of childhood pride, that her father is a senile old man who doesn’t know what he’s saying, that what’s important now is forgiveness and putting the past behind them. That’s all anyone that Adi speaks to seems to really want – to move on without actually dealing with what happened, without anyone having to acknowledge what they’re all moving on from, and without anyone having to accept culpability for it.

Adi’s mission is to stop this erasure of the unpleasant parts of the past, and that’s the mission of The Look of Silence, too. It’s not just about bearing witness, but about directly confronting and naming the guilty parties. This includes not just the people who got their hands dirty doing the killing, or the people in positions of power who ordered and organized the purges, but also those outside Indonesia, including the Western media, who helped perpetuate the “story” about what happened. Included in the film are clips from an NBC newscast from the 1980s in which the reporter on the ground in Indonesia speaks to a local about the mass deaths of Communists in the 1960s and is told that those Communists who died turned themselves in and asked to be murdered – a claim which is not only made with a straight face, but which apparently went unchallenged by the reporter. These news clips also demonstrate the economic “justification” of the government's supposed war against Communism, with the report showing all the alleged Communists who weren’t murdered but were instead turned into slave labor at rubber plantations whose product is for the most part exported to other nations. The Look of Silence is a deeply personal feeling film, but this story is ultimately larger than any one person, government, or part of the world; when evil like this is allowed to remain unchecked, and when the fruits of it extend out to benefit other parts of the world, then it touches everyone.

Because of the unblinkingly intimate way in which it is filmed, not just bringing Adi front and center but exploring the enduring trauma of the past through him, The Look of Silence can be a difficult film to watch. When Adi views footage that Oppenheimer collected of members of the death squad describing in terrible and graphic detail the circumstances of Adi's brother's death, it's impossible not to be shaken. There's no sense of escape in the film, as there was to some degree in The Act of Killing because of the theatrical nature of how some scenes were staged. The Look of Silence is a film stripped bare, presenting things without ostentation or flourish, and that makes for a film of great emotional intensity. The Look of Silence is one of the most powerful films of the century so far, one which once seen cannot be forgotten.
Posted by Norma Desmond at 8:00 AM