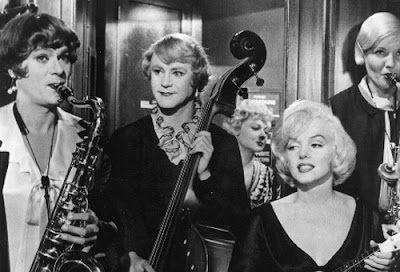 A great movie is the result of a lot of elements coming together in just the right way. There's no formula to it - what works in one film won't necessarily work in another, what doesn't work in other films might work marvelously when guided by the right hand - and great works of art tend to be great in their own specific, unique ways. But if there's any one thing that great movies, of any genre and from any time period, tend to share, it's a strong ending. Casablanca, The Godfather, Fargo, Eternal Sunshine of the Spotless Mind - wildly different films, but each possessed of a perfect ending. Some Like It Hot is another member of the perfect ending club, its final two words arguably the greatest comedic payoff in cinema history. Everything that comes before that is pretty great, too, but damn what an ending. A classic among classics and a highlight in the careers of all of Marilyn Monroe, Billy Wilder, Tony Curtis, and Jack Lemmon, Some Like It Hot is one of those enduring films that just works no matter when you see it and which reconfirms itself as a masterpiece with few equals every time you see it.

Set in 1929, the action centers on Joe (Curtis) and Jerry (Lemmon), two jazz musicians who witness the massacre of a group of gangsters by Spats Colombo (George Raft) and then have to flee Chicago before Spats can get rid of them, too. Unable to come up with the money to buy tickets out of town, the two come up with a plan to disguise themselves as female musicians and join an all-female band that's headed for Miami. Presenting themselves as Josephine and Daphne, they board the train with the rest of the band and quickly become enamored with the singer/ukulele player Sugar (Monroe), but it's only once they get to Miami that Joe is able to openly pursue her by adopting a second fake identity as Junior, a Shell Oil heir who attracts Sugar by being seemingly disinterested in her. While Joe is making headway with Sugar, who becomes determined to be the woman who can finally break through the trauma that has left Junior impotent, Jerry finds himself pursued by Osgood Fielding III (Joe E. Brown), a wealthy playboy who is determined to make Daphne his next wife.

I'm not entirely sure where one can start praising Some Like It Hot. It's a very funny movie - not in a "funny for its time" kind of way, with humor that has dulled over the decades but is still recognizable as having once been cutting edge, but funny in ways that remain clever and disarming today. That might seem like no small feat, but when you consider how "problematic" the film could seem now just based on its premise about two men who disguise themselves as women, one of whom then embarks on a romance (of sorts) with another man, it's actually fairly amazing. It's timelessness is, I think, a result of its lack of malice. When Jerry masquerades as Daphne and is pursued by Osgood the joke, ultimately, is not that Osgood has been "tricked" (which is the way that comedy tends to approach transgender characters, and though Jerry/Daphne isn't really transgender, given the way the storyline plays out I think the comparison applies), but that Osgood doesn't care. The reveal of the film's closing moments, then, is not treated as if it's an act of humiliation or punishment of this mildly ridiculous supporting character, but as a kind of triumph, which is itself foreshadowed by the attitude of the film and of Jerry towards the relationship from the outset.

Osgood's pursuit of Daphne is played for laughs, but it's not funny because Osgood doesn't realize that Daphne is really Jerry, but because as things progress Jerry becomes so increasingly invested in the Daphne persona that he starts to forget about his identity as Jerry. By the time Osgood has proposed to Daphne, Jerry is so committed to the role and to the relationship that he doesn't recognize the potential flaw in his acceptance of the proposal even as Joe starts spelling it out for him. "What are you going to do on your honeymoon?" Joe asks. "We've been discussing that. He wants to go to the Riviera, but I kind of lean towards Niagara Falls." There is no moment of "homosexual panic," no anguished moment where Jerry questions his own masculinity; instead Jerry embraces the situation, taking a practical view that, at worst, he'll end up a divorcee with a nice settlement.

Lemmon, who received an Oscar nomination for the performance, is brilliant in his approach, allowing the character to go all in, but it's the film's overall approach to gender and sexuality that sets the stage. In Some Like It Hot it's all performative, creating a sense of fluidity of identity that makes it plausible for Jerry as Daphne to become engaged to Osgood, which could have made it plausible for Jerry as Daphne to pursue Sugar (lord knows Jerry uses his Daphne persona to try, only to find his efforts constantly thwarted), and which ultimately colors even the film's heterosexual romance between Sugar and Joe. Joe isn't just adopting a new persona when he presents himself as Junior, he's also creating a context where the script gets flipped with respect to traditional gender roles. He manipulates her into pursuing him by feigning frigidity, forcing her to become the aggressor and take on what is traditionally the "male" role, while he slips into the more passive role of the object being pursued typically reserved for female characters.

Some Like It Hot is a subversive film even now because of its attitude, but it was particularly subversive in 1959 because of its impact on the Hollywood system. The Production Code, that strict form of self-censorship adopted by the studios to avoid any attempt at censorship from the government, was in decline by 1959 but it was still in effect and still strong enough just four years earlier that Wilder was left bristling at the constraints imposed on him as a storyteller while making The Seven Year Itch. Some Like It Hot contains a lot of material that was objectionable by the standards of the Production Code, and in fact was denied a certificate of approval, so the studio released it without a certificate and it was a massive critical and box office success, which helped further undermine the authority of the Production Code. It doesn't present itself as "an important film," but it was one in both attitude and in effect, and that confidence with which it unfolds itself, bold and unafraid to veer off the beaten path, is why it's such an enduring film. Nobody may be perfect, but Some Like It Hot certainly is.

Up Next: The Misfits
Posted by Norma Desmond at 8:00 AM