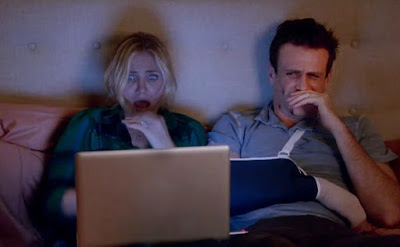 The couple at the center of Sex Tape are bored and they're tired. That's only appropriate since everyone involved in the making of Sex Tapes was apparently bored and tired, too. Despite the title which, even if the film didn't reunite the stars and director of the anything goes Bad Teacher, suggests a raunchy R-rated comedy, Sex Tape is a joyless movie that lacks in either laughs or titillation and is second only to 1995's The Net for misunderstanding the very technology that gives the story it's premise. Lots of summer movies are a bit lazy, designed to claim the quickest buck before the next big thing is released a week later, but Sex Tape sets a new bar for laziness. The only thing it really puts any effort into whatsoever is the product placement. So, if you want to hear all about the great features of the iPad, including its incredible picture quality (a fact stated multiple times in the film), then Sex Tape is the movie for you.

Cameron Diaz and Jason Segel star as Annie and Jay, who have been married since college and have a young son and daughter. Annie is a "mommy blogger" who hopes to close a deal that will see her blog bought by what appears to be a toy company run by Hank Rosenbaum (Rob Lowe), and Jay does... something at a radio station and is apparently so good at making mixes that the new playlists he creates are in constant demand, and which has resulted in him being given a bunch of complementary iPads, which he gives out to friends and family. Once upon a time, back when they were still in college, Annie and Jay couldn't keep their hands off of each other, having sex every time the opportunity arose, no matter where they happened to be at the time. Now they make vague promises to each other that they'll totally get around to having sex on Thursday, provided they aren't too tired at the end of the day. Something's gotta give and, after Annie closes the deal with Rosenbaum, giving them reason to celebrate, she and Jay decide to send the kids over to her mother's house for a sleepover so that they can spend the night alone together. However, just having the house to themselves doesn't do enough to light a fire and it isn't until Annie comes up with the idea of using one of the new iPads to tape themselves while they go through all of the positions in The Joy of Sex that they're finally inspired to get down to business.

When the excitement of the night wears off, Annie makes Jay promise to delete the video and not only does he forget to do so, he accidentally uploads it to the cloud so that it will sync to all of the iPads he's given away to their nearest and dearest. They discover this tidbit when they receive a text message from someone who has seen the video, but they can't tell who sent the message and are left to speculate about who it is and how many people may have already watched it. Unable to figure out who it is, they decide that the thing to do is to spend the night reclaiming all of the iPads they've given away because they think that that's how the cloud works. Over the course of the evening they will collect 3 (by my count) of the iPads, Jay will almost kill and almost be killed by a German Shepherd, Annie will do some cocaine, they'll discover Rosenbaum's odd preoccupation with Disney's animated films, get blackmailed, and break into the headquarters of a porn company in order to destroy their server to get their tape off of it.

The story that Sex Tape tells is the very definition of an "idiot plot," meaning that the only thing that keeps it going is that the characters continue to act stupid because every problem that comes along could be solved if only a character would utter an obvious line of dialogue. This isn't even a reference to Jay and Annie thinking that they can remove the tape from the cloud by collecting all of the iPads they gave away and that that's the only possible solution to their problem, though that's pretty stupid; it's a reference to just about everything else in the movie. There's the elaborate lies that Jay and Annie come up with in order to get the iPads without giving away why they want them back - why not just tell people that there's a manufacturing error and that the iPads will be replaced? There's the text message they receive tipping them off about the tape which later leads to a blackmail attempt which (spoiler?) comes from their friends' kid. When they threaten to tell their friends that the kid is blackmailing them, the kid counters that his parents won't believe them and they let it drop at that. Dudes, you've got the text message and, while you didn't recognize the number, surely the kid's parents would recognize that the number belongs to him, no? There's also the fact that the kid is blackmailing them for $25,000 so that he can buy a horse to please his "bitches." It's gonna be kinda hard for him to explain to his parents how he got a horse, I would think.

Sex Tape just doesn't put a lot of thought into... anything, nor does it really have any sense of identity. The trailers for the film made it look like a "crazy" sex comedy (which isn't necessarily the film's fault, since trailers are often misleading, though the movie does have "sex" in the title), and the film sets itself up to be a comedy about a couple struggling to re-establish the connection they once had before their relationship became one of their lower priorities, but it's ultimately never as daring as the trailer would imply, nor as thoughtful as it might believe itself to be. Though it managed to get an R-rating, I imagine that that came as a result of the amount of cursing in the film and the semi-frequent backside nudity, because the sexual content isn't really that far beyond the ordinary (most of what happens in the actual tape isn't sex, but Annie and Jay messing around, including Jay singing a naked-except-for-a-tie-around-his-waist rendition of "Take Me Out to the Ball Game"); and when it comes to the relationship between Annie and Jay and their desire to rekindle what was once between them, the dialogue is so clunky that it almost seems like they're reading it from a self-help book about couples dealing with the loss of emotional and physical intimacy. It's bad and both Diaz and Segel seem utterly bored with it. But, hey, I hear the iPad they have is just great.

Should It Have Been a Blockbuster?: It's basically an overlong advertisement, so, no.
Posted by Norma Desmond at 8:34 PM

I don't think this is quite as bad as everyone else, but only because I thought the montages that open and close the film were fun. Everything between them is awful, mind you, so I'm not exactly arguing with your review. My question is can we say that it was a complete Not-buster since it managed to take in another $88 mil globally, giving it a total box office of $126 mil against a $40 mil budget?

That's a fair point about the global box office. My thinking when I started the series a few summers ago was to focus exclusively on the domestic box office, since it's the domestic take that people seem to focus on when considering something a "bomb" or a success - I suppose because the majority of the really prominent movie writers are in the US. If I took global box office into account then Terminator: Genisys could arguably be called a success (financially if not creatively) as well.