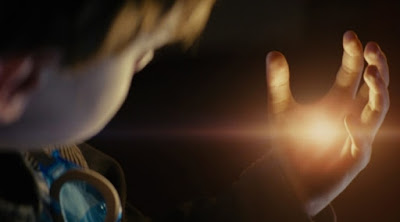 In just a decade and a handful of movies, writer/director Jeff Nichols has become one of the most consistently interesting and consistently good American filmmakers working today. His debut, Shotgun Stories, is an underseen but critically beloved movie about the feud that arises between two sets of half-brothers after their father dies, which he has followed up with the intense apocalyptic drama Take Shelter, and Mud, a drama about a teenage boy having his romantic illusions about what it means to be a man shattered. Now comes the supernatural thriller Midnight Special and, later this year, Loving, a drama about the landmark US Supreme Court case Loving v. Virginia. If Loving is even half as good as Midnight Special, then 2016 will be an extremely good year for Nichols, indeed.

The film kicks off with news of the abduction of a young boy in rural Texas. Photos of the man who is said to have taken him are flashed across the screen though, curiously, there are no photos of the boy himself. The man is Roy (Michael Shannon), who is actually the boy's father, and the boy is Alton (Jaeden Lieberher), and both have been living for years on a ranch owned by Calvin Meyer (Sam Shepard), the leader of a religious cult who adopted Alton once it became apparent that he was "special." Specifically, Calvin and his followers believe that Alton is a prophet, his words incorporated into Calvin's sermons and leading them to believe that they are coming up on an apocalyptic event. They know the date on which this event will occur, but not the place, and as they believe that they will only be saved if they are in proximity to Alton, they are desperate to have him back. Roy has gone on the run with Alton, as well as his friend Lucas (Joel Edgerton), with the intention of reuniting with Alton's mother Sarah (Kirsten Dunst), who was excommunicated from the cult over her resistance to Alton being adopted by Calvin, and taking Alton to the location where the "event," whatever it may be, is going to unfold.

Alton is, indeed, a special boy, one who can hear the communications occurring over radio and satellite signals, whose eyes can emit beams of light which apparently allow anyone looking into them at that moment to see incredible things that they can't quite describe, and who experiences fits that cause his surroundings to quake. Roy, Sarah, and Lucas don't quite understand Alton's abilities but they believe that he's something extraordinary and they believe him when he begins to tell them that he's a being from another plane of existence, one which he describes as existing "on top of" our own. Together, they will do whatever it takes to protect him, which means evading capture not only by the cult, but also by the government, who began monitoring the cult once they realized that its members were suddenly buying weapons in a massive quantity, and then discovered that the sermons were full of classified government information. Multiple agencies have come together to find Alton, including the NSA under the direction of Paul Sevier (Adam Driver), who notices the same patterns in Alton's information that Roy did and is thus able to figure out where Roy is headed with Alton.

Midnight Special makes for an interesting companion piece to Take Shelter, a film in which a man is convinced that he's having visions of the end of the world and everyone around him is convinced that he's suffering from a mental illness. Here, Alton's supernatural abilities are never in question and everyone, except his parents and Lucas, wants to get control of those abilities for their own ends. Both films are very intense but, despite having the government and a religious cult in the mix, Midnight Special is a movie told from a gentler point-of-view, with a sense of wonder to it that feels Spielbergian at times (the film sometimes feels like E.T. if Eliot were the extraterrestrial). It contains moments of violence, when Alton's parents have confrontations with either members of the cult or with members of the various government agencies searching for them, but it's mostly about how everyone who comes into close contact with Alton is changed in some ethereal way that borders on the divine, and about the lengths that the family, and Roy in particular, will go to in order to help Alton realize his destiny (or whatever you want to call it) because he's made them believe in something bigger than themselves.

Midnight Special propels itself forward on this sense of awe, which it manages to keep building and building as it heads to the point in the story where the "event" will unfold. For me that moment actually ends up breaking the spell that Nichols is so effectively able to weave up until that point because my first thought was "Oh shit, Alton's going to Tomorrowland," but for the most part Midnight Special is totally engrossing. This is due both to Nichols' skill at constructing the story and to the actors, especially Shannon. Nichols and Shannon previously collaborated on Shotgun Stories, Take Shelter, and Mud, and here the story folds itself easily around Shannon's fervent performance, the urgency of which does a significant part of the film's job for it simply by setting the tone and infusing the story with energy. As played by Shannon, Roy is not just Alton's father, he's also Alton's "follower" and his sense of purpose derives not just from being Alton's parent, but from his feeling that in protecting and assisting Alton, he's doing something that he can truly believe in. It's a captivating performance, truly one of Shannon's best to date, and the film around it is intriguing and sometimes stunning, one that is equal parts breathless thriller and a deeply felt drama about spirituality and belief.
Posted by Norma Desmond at 10:16 AM