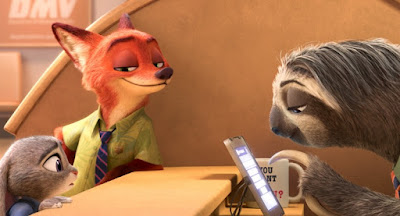 Zootopia won me over easily and early. What can I say? Nothing beats baby animals, even animated ones. It's too adorable to resist, which is why all of the inevitable sequels to this film will also be successful. Of course, it helps that the film has a premise that would lend itself to multiple stories as, even once the mismatched partners narrative that drives this one runs its course, there's still a whole world left to explore. If the sequels can manage to be as charming and clever as this one (and, perhaps, be slightly less confused in its political allegory than this one, which has its cake at the beginning and then eats it, too, by the end), I'm sure they would be critically, as well as commercially, successful. Like the best animated films from the past several years, it's a film straightforward enough to appeal to younger viewers, but with depth enough to appeal to older viewers as well. Zooptopia is a winner.

Set in a world where humans have never existed and animals have evolved to form a human-like society where predators and prey live together in harmony, Zootopia centers on Judy Hopps (Ginnifer Goodwin), who was born and raised in the rural hamlet of Bunnyburrow, but whose ambition is to become a police officer and move to the metropolis Zootopia. Despite everyone telling her that she can't do it, because rabbits don't become police officers, Judy succeeds in making it through the police academy, only to find disappointment on her first day when she's relegated to parking duty by Zootopia PD's Chief Bogo (Idris Elba). During that day she makes the acquaintance of Nick Wild (Jason Bateman), a fox and con artist who becomes invaluable to her the following day when she realizes that he was the last person seen with Emmitt Otterton, one of a growing list of predators who have gone missing in Zootopia. With Bogo having given her 48 hours to prove herself by solving the Otterton disappearance, Judy blackmails Nick into using his connections and knowledge of Zootopia to help her solve the case.

As they work together, Judy and Nick end up traveling all through Zootopia, including the icy Tundratown, where they stumble into an encounter with the fearsome mob boss Mr. Big, who turns out to have a connection to Otterton and who sends them to the Rainforest District, where they find a jaguar that has gone "savage" (meaning that he's degenerated into violent and base instincts) and learn that there is a conspiracy afoot. With Nick's help, Judy cracks the case and exposes the truth behind the missing predators and some corruption within government ranks. Now taken seriously as an officer of the law, Judy should be happier than ever, but is instead completely disillusioned with herself. In becoming the new face of the Zootopia PD and proving the validity of the government's "Mammal Inclusion Initiative," Judy has officially "arrived," but she's also lost her friendship with Nick in the process and is left believing that by solving the case, she's made Zootopia a worse place. Fortunately, a chance for redemption soon presents itself.

Although Zootopia is a cute movie where animals act like people, it's also an undeniably political movie about overcoming prejudice and the importance of learning to live and work together to make society function. It is not at all reticent about making this point, though it makes it by muddling its own metaphor regarding race relations. Zootopia begins with the suggestion that "prey" are the disadvantaged minority, with Judy told repeatedly that she can't enter into a job of institutional power because such jobs just aren't done by animals like her, and then attaining her dream and seeing it characterized as demonstrating the success of a diversity initiative (the Mammal Inclusion Initiative). But prey are not the minority, they in fact represent 90% of Zootopia's population, and it is predators who bear the brunt of the most harmful stereotypes, with Judy getting into some trouble when she suggests that predators are biologically predisposed to violence, and a sequence set in a museum suggesting that predators were slower to "evolve" into modernity than prey. So the film creates a situation where prey are at once the victims of institutionalized discrimination while also being the group with the institutional power, who go on to use that power to vilify the actual minority population and use that as an excuse to try to restrict and control them. Even if the film's heart is in the right place in its argument that you can't judge a book by its cover and that it's a person's character that matters, it makes this argument from a very confused perspective that results in an allegory that doesn't hold together.

That said, Zootopia is still a very good movie, and Judy and Nick make for a pretty engaging mismatched buddy duo thanks, in no small part, to the voice work by Goodwin and Bateman. The world of Zooptopia, socio-political metaphor aside, is also very well-realized, with each of the districts in the metropolis revealing different and clever little details, some of which are foregrounded, some of which only unfold in the background. It's a fun movie and I suspect that the scene which takes place in the Zootopia DMV, which despite appearing in all the trailers still manages to be hilarious within the context of the movie, will remain of the funniest movie scenes of 2016 once the year is all said and done.
Posted by Norma Desmond at 1:45 PM