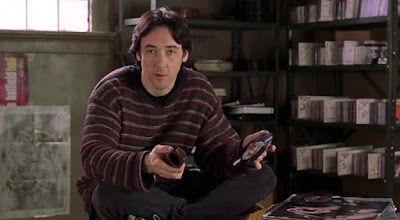 The saying goes that misery loves company, but that seems self-defeating. Misery loves solitude, loves the thought that the anguish one is experiencing is somehow unique, something no one else can possibly understand. Misery craves isolation, not companionship, because companionship might break the spell. High Fidelity, based on the novel by Nick Hornby, is about a man who is miserable, who is so entrenched in the notion that he's the sad sack who's always being rejected that it becomes a self-fulfilling prophesy. Sharp, funny, and incisive, High Fidelity is one of the rare films that manages to clearly express its protagonist's point of view without adopting it for itself. High Fidelity isn't often spoken of as one of the best films of the 2000's (perhaps because, in certain respects, it is very much a product of the 1990's), but it absolutely is one of the decade's best films.

John Cusack stars as Rob Gordon, a former DJ who now owns and operates a record store where he has two employees - Dick (Todd Louiso) and Barry (Jack Black in his breakthrough role) - who he only hired to work 3 days a week but who have taken it upon themselves to show up every day. As the film opens, Rob is despondent at the fact that his girlfriend, Laura (Iben Hjejle), is moving out. In an effort to soothe his heartbreak, he starts making the first of several lists he'll make throughout the film, this one counting down his top 5 most painful breakups, happily declaring that Laura doesn't even make the cut. This kick-starts a trip down memory lane which finds him reliving the circumstances of each of those key break ups: there was Alison, his very first girlfriend in middle school, their relationship consisting entirely of meeting after school to make out for half an hour on the bleachers until one day he arrived at the spot and found her making out with someone else; his high school girlfriend, Penny (Joelle Carter), who wouldn't sleep with him and then immediately after they broke up slept with someone else; Charlie (Catherine Zeta-Jones), a college girlfriend whom he found deeply intimidating and who eventually left him for another man; Sarah (Lili Taylor), with whom he bonded over having been dumped by their respective lovers only to end up being dumped by her once she met someone else; and Jackie, who he's forced to admit didn't ever mean anything to him and whose inclusion in the list was only a means of ensuring that Laura couldn't make the cut.

After thinking over these relationships, Rob decides that the only thing that could possibly break the cycle of him getting involved with a woman and then getting dumped by her is to reconnect with all these women and find out where things went wrong. Much to his surprise, these efforts don't confirm his conception of himself as someone cursed and doomed to end up alone, the guy that women are always taking for granted. Instead they reveal (or they would, if he was really paying attention and self-reflecting) that he's been selfish, insecure, and demanding of things from the women that he's been involved with that he isn't willing to give back. Though Laura's friend Liz (Joan Cusack) is, at first, sympathetic to Rob, who is convinced that he's been betrayed by Laura with their former neighbor (Tim Robbins), she's quick to change her tune once she hears Laura's side of the story, which includes the fact that Rob cheated on her apparently just because the opportunity presented itself, forcing Rob to acknowledge - to the audience, if not to Laura herself - that perhaps he isn't totally blameless in the breakdown of the relationship and that, perhaps, he isn't a victim of circumstance or of fickle women, but just a guy who reaps what he sows.

High Fidelity could easily have fallen into the trap of depicting its hero as, well, as "hero," a guy worthy of being emulated whose only fault is that he continuously falls prey to the mysterious wiles of women who don't know what they want, except that they don't want him. This is especially true since the film is built around fourth-wall breaking monologues delivered by Rob directly to the audience; by design, this should align the film with Rob's "side," rooting it in his mentality. Instead, the film refuses to let Rob off the hook, waiting patiently for him to start reflecting on his own actions so that he can recognize that his biggest problem is the fact that he just doesn't try, such as when he confesses that he was never fully invested in his relationship with Laura and always had one foot out the door, thinking that something "better" might come along. The film also isn't afraid of making him look like a total asshole, such as when he meets up with Penny in the present day to talk about their breakup and she not only points out to him that she didn't, in fact, break up with him, but that he dumped her because she wouldn't have sex with him, but then goes on to tell him that following their break up she had a sexual encounter which she specifically says wasn't rape (but which sounds a whole lot like it) that left her completely messed up well into her 20s. Rob's response to this story isn't sympathy or empathy; it's happiness. He didn't get dumped! That's literally the only thing he takes away from that conversation. He didn't get dumped and that's great because that means that he isn't destined to be rejected over and over for the rest of his life.

The film is lucky, in this respect, to have Cusack in the role because he can play up the jerkier aspects of the character without making you hate him. Instead you just sort of roll your eyes at how self-deceiving he is and wait for him to catch up, which he eventually does and which is another of the film's strengths. Though it depicts the loss of a relationship as an experience of deep and chaotic emotion, it presents the actual relationship at the heart of the film in a clear-eyed and unromanticized way. Even when Rob and Laura reunite, it's not some grand thing that magically fixes all the problems in the relationship; the problems are still there, the relationship is still something that needs to be worked at in order to survive, neither of them is perfect, and both of them need to compromise a little. It's an unusually honest depiction of a relationship coming from Hollywood, which traffics so successfully in the notion that relationships are simple things that require only that two people be destined to be together.

Before re-watching the film recently it had probably been about 15 years since I'd seen High Fidelity. I was struck by how timeless the content of its story is - for as long as people have been telling stories, they've been telling stories about the despair of breaking up - even as the film itself feels like something of a time capsule, something which captures a transitory moment in culture. High Fidelity came out in 2000, but is was filmed in 1999 and feels very much like a '90s movie, depicting cultural identifiers that seem almost foreign now. Not only do the people in the film prefer long, corded landlines (and occasionally pay phones) to cell phones, but Rob's store still sells cassette tapes and when he and his friends make mix tapes, they literally use tape instead of CDs. And not only does everyone smoke, but they smoke everywhere - in restaurants, at work, wherever they happen to be at the moment. Watching the film now almost feels like going back in time in some small way, even though the story it's telling isn't about "living in the '90s" so much as it is simply about "living" - which is what makes it such a great movie in the first place.
Posted by Norma Desmond at 1:13 PM