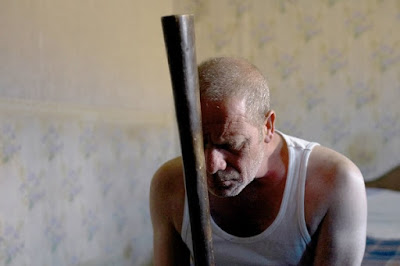 There’s no hope in Paddy Considine’s Tyrannosaur, no redemption, no triumph of the human spirit, no respite from gloom. Even the moment which represents what it could be (arguably) a moral victory is so skewed and dark that it unfolds with the same violence that marks everything else in the story. Tyrannosaur is a bleak and unrelenting film about broken people for whom brutality is a way of life and who have no thought that they might escape it because it would never occur to them that there’s any other way to live. This is not a film that will make you feel good, but it’s one of those rare gems that is so excellent and captivating that it hardly seems to matter that it crushes your soul as you watch it. Tyrannosaur is the sort of film that, once seen, can never be forgotten.

The two people at the centre of the film are Joseph (Peter Mullan) and Hannah (Olivia Colman) and, at first glance, it might appear that this will be the story of a damaged man who is rescued by the kindness of a good woman, or of a bad man who finds redemption by rescuing a vulnerable woman, but it’s not nearly that simple. Joseph is a damaged man – the film opens with him drunkenly kicking his dog to death and throughout he will commit acts of physical violence and spit out drunken invectives against those he believes have or will wrong him – but Hannah is an equally damaged woman, one whose alcoholism is something she hides behind a veneer of religion and middleclass affluence. While Joseph is a drunk who never pretends to be anything else, Hannah is a secret drinker, turning to alcohol in response to the abuse she endures at the hands of her husband, James (Eddie Marsan), which only escalates once he discovers her friendship with Joseph.

Before the film is over, both Joseph and Hannah will be driven to commit acts of desperate brutality, ones which, despite being arguably justifiable, aren’t really depicted that way by the film because it doesn’t portray violence as a passionate act, but one of cold detachment that merely perpetuates a cycle. Joseph and Hannah’s climactic acts, which Considine refuses to frame as moments of catharsis which bring about even some small sense of relief, are only new layers to the tragedy of two lives which have only ever been hopeless. While Considine does not take pleasure in the misery of his characters, he tells their story in a stark, matter of fact way that acknowledges that the cycle can’t be broken simply by two people falling in love or forming a connection (or however you want to characterize the relationship between Joseph and Hannah). While Hannah, who lives her life as a series of poses meant to keep the outside world from discovering what happens behind her closed doors, is able to trick herself into believing, at least for a little while, that the life she’s been living is something she can simply step out of, like a shoe, Joseph sees things with the same kind of clarity that the film does, recognizing that it takes more than that, and more than he potentially has left in him, to actually change things. Any relationship between the two of them may bring about a moment of peace, but it wouldn’t actually do anything to stop their destructive impulses; it would only render them dormant for a little while and then emerge to blow things up again later.

In their own very specific ways, Joseph and Hannah are incredibly sad characters, people who have been used up and spit out by life, but the performances by Mullan and Colman are compelling and emotionally brave. As Hannah, Colman endures some pretty vicious indignities as her character hedges the amount of abuse she can take against the abuse that would come her way were she to react to what’s being done to her, and that mixture of fragility and strength makes this one of the most complete and complex depictions of a victim of abuse ever captured on screen. Meanwhile, as Joseph, Mullan plays a character defined by his duality, a man who will explode with rage at the slightest provocation one moment, and then be overcome with guilt and despair over his actions in the next. By introducing him at a moment when he’s committing a heinous act, Considine lays down a challenge to the audience to invest itself in a man who could do something so despicable, but the film builds itself easily around Mullen’s performance, which is so effortless in the way that it portrays a man who is deeply flawed but still human that you can’t just reduce the character down to one bad act and write him off. Tyrannosaur is never an easy film and its darkness might be a bridge too far for some viewers, but if you can stick with it, it’s one of the richest and most rewarding character films you’ll ever see.
Posted by Norma Desmond at 12:01 PM

This really is a fabulous film. I saw it a couple of years ago and I still consider it one of the best I've ever seen. I told people that it was also an incredibly difficult film to watch but it really had to be seen.

At the time, I hadn't really seen Olivia Colman in any dramas and I didn't know Peter Mullan at all, but I was impressed with their performances.

I agree with your review... I hope more people will see this film.