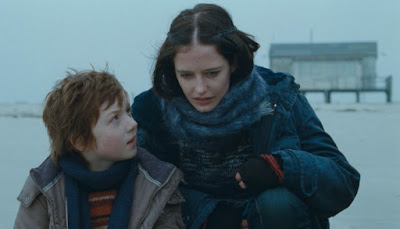 Girl meets Boy. Girl and Boy become inseparable. Girl's family moves away. Girl returns many years later and reunites with Boy. Boy dies in tragic accident. Girl convinces Boy's parents to give her permission to use his remains to have him cloned. Girl carries the cloned fetus, gives birth to cloned Boy, raises cloned Boy as her son. Classic story. Does it get weird? I mean, it pretty much starts weird, but does it get weirder still? Oh, yes, it certainly does, and in ways other than the obvious one. Does that make it interesting? Well... Womb is sometimes intriguing and raises some complex and interesting questions, but on the whole the film is far too listless for such a peculiar premise.

Set in an unnamed seaside village in England, Womb begins with a scene removed from context, the implications of which are only clear at the end. After this prologue the story moves back, introducing its two characters when they meet at the age of 9: Tommy (Tristan Christopher) has been born and raised in the village while Rebecca (Ruby O. Fee) is there for a time visiting her grandfather. The two children quickly form a bond, but it's broken when Rebecca learns that her family will be moving to Japan. Twelve years later Rebecca (now played by Eva Green) finally returns and tracks Tommy (now played by Matt Smith) down, discovering that he has held on to the memory of her just as closely as she has held on to the memory of him. They become joined at the hip once more as they restart their relationship as adults and when he announces that he'll be going out of town to further the cause of his political activism, she decides to join him so that they won't have to be apart. En route there's an accident which results in his death, devastating Rebecca as well as his parents. In the aftermath, Rebecca approaches Tommy's parents about using his remains to create a clone, offering that she herself could carry the child to term. Tommy's mother (Lesley Manville) is quick to shut the idea down, but his father (Peter Wight) is more open to it, finding some comfort in the notion that Tommy might live on, even if he himself can't bear to stick around to watch him grow up again.

Rebecca gets what she wants and provides Tommy's cell material to a biotech company which creates a clone and then implants it in Rebecca, who gestates the fetus and then delivers the new Tommy via C-section. For several years thereafter, Rebecca raises Tommy (Christopher, again) as her son in the same village where the original Tommy grew up, keeping the truth about his origin a secret from him and from everyone around them as a result of prejudice against clones. However, once rumors start to spread that Tommy is a clone, he and Rebecca become outcasts in the community and in an effort to protect him from being shunned, Rebecca moves herself and Tommy to a remote and isolated house. Years pass and Tommy (back to Smith) grows into an adult and begins a relationship with Monica (Hannah Murray), whom he moves into the house. While Rebecca feels increasingly threatened by Monica's presence, and Monica is baffled by the strange tension between Rebecca and Tommy, Tommy is slowly coming to the realization that things have been kept from him and begins demanding answers.

Let's get this out of the way quickly: the premise of the story obviously makes for some creepy sexual undertones, what with Rebecca giving birth to and then raising the man that she considers the love of her life. That said, Womb's acknowledgment of those undertones is complicated by how Rebecca's relationships with the various Tommys is framed. The relationship between Rebecca and the original adult Tommy is characterized as a chaste one, and yet the relationship between Rebecca and Tommy as children is somewhat precocious, and some (though not all) of the creepiest interactions between Rebecca and second Tommy occur when he's a child. At the same time, however, the way that things play out doesn't make it seem like Rebecca is grooming the second Tommy for a relationship - the way that she relates to him is, for the most part, maternal, and the prologue, considered in its proper context once that's revealed by its proper place in the story, suggests that her interest is ultimately more in being a mother than a lover. There's a lot to unpack in terms of how Rebecca and the Tommys interact and the more you think about it, the more layers to it you discover.

Yet, for how much the story depends on intimacy - be it romantic intimacy or familial intimacy - Womb is an awfully remote and chilly film, and one filled with long, awkward pauses with certain moments and scenes running about a beat and a half too long. It's also a film that pads things out by raising and then immediately discarding elements that might make the story more complex. For example, Rebecca pursues using a biotech company to have Tommy cloned even though the fact that Tommy is killed on his way to demonstrate against a biotech company that has been cloning animals suggests that he would be against this. That casts her fixation with him in a somewhat different light, suggesting that it's not the selflessness of love driving her to ensure that he has another chance, but the selfishness of obsession causing her to disregard his actual feelings in order to get what she wants - not that the film actually explores that. Also largely unexplored is the dynamic between the clones (called "copies" in the film) and the rest of society. We're given to understand that cloning as it least somewhat common, but not embraced by society, with the people in the village treating clones with disgust. This is a key plot point, given that it's what drives Rebecca and Tommy into isolation, but it also exists only to facilitate that move and then is cast aside. That tendency to raise questions and then just drop them is probably the most frustrating thing about Womb. It's a film that could have been so much more.
Posted by Norma Desmond at 11:09 AM