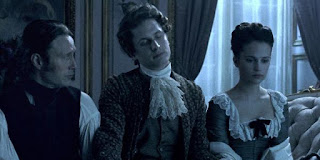 Forbidden love and political power can be a dangerous combination, particularly when that power is tenuous and when it is held in a socio-politically turbulent time. In 1770, at a time when the Enlightenment threatened the status quo of brutal aristocratic rule, an idealistic physician uses his friendship with the King of Denmark to institute changes to make the lives of ordinary people better, and then watches as his reforms – and his life – come undone as a result of his affair with the Queen. It’s a story rife with dramatic potential, which Nikolaj Arcel’s A Royal Affair exploits well, for the most part, except that he’s mistaken about which of the film’s relationships is the most interesting and compelling.

The story is told from the perspective of Caroline Matilda (Alicia Vikander), sister of Great Britain’s King George III, who in 1766 is betrothed, sight unseen, to King Christian VII of Denmark (Mikkel Folsgaard). The marriage immediately hits trouble as the mentally ill Christian proves too much for Caroline Matilda to bear, and her isolation in a foreign court leaves her lonely and despondent. Once they’ve had a son, their marriage effectively ends, and Christian leaves for a year-long tour of Europe which seems like a relief, rather than a hardship, for his Queen. During his sojourn he meets Johann Struensee (Mads Mikkelsen), a small town doctor who wins the position of King’s physician by treating Christian like a person, rather than a problem that must be contained. When Christian finally returns from his tour, it’s with Struensee in tow.

At first Caroline Matilda has little use for Struensee, whom she sees as just another facilitator of the behaviors she finds so abhorrent in Christian. Gradually, however, the two become friends, drawn together by their love of books and through their discussions of Enlightenment ideas. After Struensee successfully inoculates the young heir apparent against smallpox, his influence with both the King and Queen grows, and he’s able to convince Christian to begin taking a more active role in governance, proposing reforms rather than just blindly signing any document the Council puts in front of him. The Council rejects most of his proposals, eventually prompting Christian to seize control by dismissing the Council and creating a new form of government which consists solely of himself and Struensee. Meanwhile, the friendship between Caroline Matilda and Struensee has progressed into an affair which, once discovered, will become a weapon to be used against them by the many enemies they’ve made in court by empowering Christian.

Because romantic stories are an easier sell than political stories, the relationship between Caroline Matilda and Struensee is the film’s focal point and its driving force. While Mikkelsen and Vikander deliver solid performances as the doomed lovers, the romantic plot begins to lose momentum once the relationship is consummated. We know how this story ends – not just because of history, but because the film faithfully sets itself to the familiar cinematic beats. The more interesting relationship is the one between the mad King and his progressive friend/romantic rival. Struensee gains Christian’s affection by treating him as a friend, and Christian responds by treating him with reverence, taking his word as the gospel. At first they seem like an effective team – one has ideas that will improve the lives of the common people, and the other has the power to put those ideas into effect – but it isn’t long before their working relationship becomes an echo of Christian’s relationship with the Council. Struensee encourages Christian to sign documents sight unseen and, eventually, to give Struensee the power to sign documents on Christian’s behalf so that he doesn’t have to sign them at all. Although the results for the common people are different, history has repeated itself at the institutional level: Christian is only nominally King, all but ignored by a more powerful intellect.

Although he’s reduced to a supporting role in this story, Christian is nevertheless the film’s most fascinating character. He is at once quick to impose his status as King during social situations, his eccentricities given a pass by the courtiers, but far more submissive when dealing with the Council, who treat him like a figurehead who should feel lucky that he’s even allowed to attend their meetings. As played by Folsgaard, he’s a character at once worthy of enmity and pity and brings some much needed energy to the piece whenever it begins to slacken.

All that being said, A Royal Affair is a beautifully rendered movie and a solid entry in the “Royal historical drama” subgenre. It doesn’t reach for the greatness that it’s premise makes open to it but, for what it is, it’s a perfectly good film.
Posted by Norma Desmond at 8:00 AM