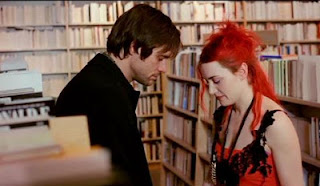 It’s better to have loved and lost than never to have loved at all. At least that’s what Joel (Jim Carey) and Clementine (Kate Winslet), the couple at the centre of Eternal Sunshine of the Spotless Mind, discover after undergoing a procedure that systematically erases them from each other’s memories, only to find themselves drawn back together, as if by fate. The film, a collaboration between Charlie Kaufman, arguably one of the most important screenwriters of the last twenty years, and Michel Gondry, an innovative visual stylist who hasn’t really lived up to the promise set by this film, is the sort that transcends genre. It can be described as a romance, a science fiction film, a comedy, a drama, a thriller – and it is a brilliant example of each and every one. It’s not just a good movie, it’s a perfect one.

Joel and Clementine meet on a train from Montauk and, despite being polar opposites (Joel is shy and quiet, Clementine is an unabashed extrovert), find themselves oddly fascinated with each other. Unbeknownst to them, that strange sense of instant familiarity they feel in each other’s presence stems from the fact that they are former lovers who, after an acrimonious split, have had each other erased from their memories by the Lacuna clinic. Clementine has done it, as she does virtually everything, on a whim, while Joel undergoes the procedure in direct response, as a means of evening the score and striking back at her even though she no longer has the capacity to appreciate such an act.

Joel’s decision is made in anger and, in the midst of the procedure, he begins to have second thoughts. As Clementine – and all things that will remind him of her – begins to disappear from his memory, Joel’s unconscious self begins to rebel against this medical intervention. He comes up with a plan to hide Clementine away in memories where she shouldn’t factor – childhood memories that, despite the fact that Clementine’s sudden presence in them is the result of manipulation, go a long way to explaining why Joel was attracted to her in the first place. Accustomed throughout his life to not being seen, he’s attracted to Clementine who, through her ever changing hair color, her attitude, and her impulsiveness, makes sure that she’s always seen. Although the relationship ended in pain, that doesn’t render it valueless, which is why Joel fights so hard against the loss of it once the erasure gets underway. Clementine might not ultimately be right for him, but Joel still needs the experience of being with her to become the person that he’s supposed to be, and Clementine likewise needs him. In the film's final, beautiful moments, they seem to realize this, acknowledging that if they try again they'll probably end up right back where they started, but willing to make another go of it anyway.

Eternal Sunshine is a resonant film because it starts with such a strong emotional core – Joel and Clementine’s relationship is told in an elliptical manner, but the moments it hits on are moments that ring with truth and honesty – and then joins it with a memorable visual style. Memories overlap with and invade each other, details being lost before our eyes while consciousness echoes into the unconscious, which tries to answer back. The style of the piece is very pronounced, but instead of muting the narrative itself, it works in perfect harmony with it. Eternal Sunshine is a film in which the elements are flawlessly balanced; it’s a stunning piece of visual work, but it’s also a deeply moving character story. It’s one of those rare films that loses nothing through the passage of time, the kind that will eventually become seen as an unassailable classic.
Posted by Norma Desmond at 8:00 AM