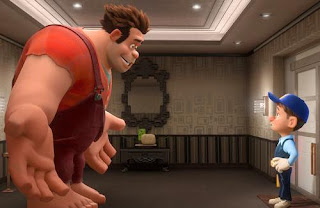 It isn’t easy being bad, doing half the hard work and getting none of the glory. Such is the lot of Wreck-It-Ralph, the villain of the video game Fix-It Felix, Jr., who longs, just once, to get to be the hero, to get a medal, be celebrated, and maybe even have friends. Disney’s Wreck-It-Ralph pretty much has all the bases covered – it’s a nostalgia trip through the gaming world, a clever comedy that can speak on the level of both a child and adult, and an engaging and intelligent story about an outsider trying to find a way in. How this lost Best Animated Feature to Brave (which I liked, but which was definitely “lesser Pixar”), I will never understand.

For 30 years, Ralph (John C. Reilly) has been getting up every day and destroying an apartment complex so that his game’s hero, Fix-It-Felix, Jr. (Jack McBrayer), can rebuild it. Ralph knows that he plays an important role in the game, but he’s feeling unappreciated and dissatisfied, wanting just a little bit of recognition from his co-workers for his contribution. At a support meeting for video game villains, he reveals that he wants to stop being a bad guy and start being a hero and later, after Fix-It-Felix, Jr.’s 30th anniversary party (to which he was not invited), he decides to go rogue, sneaking into another game so that he can win a medal and finally get a little bit of the spotlight.

Ralph gets into the first-person shooter game Hero’s Duty, getting a medal, but also ending up on a wild ride in an escape pod with a Cy-Bug, insect-like antagonists in the Hero’s Duty game. The escape pod ends up flying right out of the game and into the racing game, Sugar Rush, where Ralph loses his medal to a would-be racer named Vanellope (Sarah Silverman), who has been exiled from game play because she has a glitch which, if she were put into play rotation, could result in the game being taken off-line. Ralph agrees to help Vanellope circumvent the authority of Sugar Land’s ruler, King Candy (Alan Tudyk) and get into the game in exchange for getting his medal back. Meanwhile, Felix has come looking for Ralph so that he can get him back to their game before they get unplugged, and he’s joined by Hero’s Duty leader, Calhoun (Jane Lynch), who wants to find the Cy-Bug before it lays eggs and infects Sugar Rush.

It would have been easy for Wreck-It-Ralph to rest on its ability to create the multiple gaming worlds that show the progression of technology since the inception of arcade games, and then coast on the story. Instead, in addition to creating a visually interesting and often beautiful world, it also expends the effort to create a complex and compelling narrative and to develop the characters so that they have a little bit of dimension. The film is more artistically ambitious than it may at first appear, and director Rich Moore and writers Phil Johnston and Jennifer Lee split the story into multiple threads and then bring them back together with ease.

In addition to being a really good movie, Wreck-It-Ralph is also a lot of fun. Reilly is great as Ralph, bringing the sort of sad-sack-makes-right characterization to him that he’s successfully brought to so many live action roles, and Silverman makes for a great foil for him as Vanellope. With some many awards now to its credit in addition to its considerable box office take, it’s no surprise that a sequel is already in the works. Although sequels so often end up being soulless mirrors of their originals, I think that Wreck-It-Ralph leaves enough territory unexplored that a follow-up could prove a rich endeavour – though the original will still be a tough act to follow.
Posted by Norma Desmond at 8:00 AM