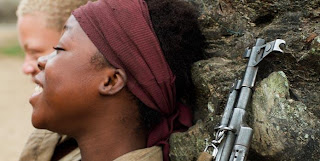 Ten years in the making, writer/director Kim Nguyen’s Oscar nominated Rebelle (also known as War Witch) is a vibrant and profound character study that displays remarkably little pathos, given its subject matter. It is a work that rings with the kind of emotional permanence that separates “films” from “movies” and though obviously you can’t know until well after the fact whether a film will truly endure or not, this certainly feels like a picture that will last. A story of war, survival, love and, ultimately, hope, Rebelle is an elegiac and beautiful film.

Set in an unnamed country in sub-saharan Africa, the story of Rebelle is narrated by its protagonist, Komona (Rachel Mwanza), to her unborn child, whom she worries that she’ll be unable to love due to the circumstances of his conception. At twelve years old, her village is raided by rebels and she and the other children are gathered up as the rest of the village is razed. Forced to kill her parents, she begins her life as a child soldier in the army of the Great Tiger (Mizinga Mwinga) and under the command of the Commandant (Alain Lino Mic Eli Bastien). Komona quickly sets herself apart from the other child soldiers through her ability to see the dead and through them know the location of the government army in any given area, earning herself the title of “War Witch.”

Being a War Witch means having a special place in the army, but it also means becoming a target. The status only lasts for as long as she’s able to correctly guide the Great Tiger’s army; once she lets him down, she’ll be killed. A fellow child soldier, Magicien (Serge Kanyinda) knows this and convinces Komona, with whom he’s fallen in love, to run away with him. They escape to the home of Magicien’s uncle and try to live a normal life, but the Commandant eventually comes looking for Komona and takes her back to the rebel army. Now 14 and pregnant by the Commandant, Komona needs to find a way out – for herself and for her child.

Under Nguyen’s strong direction – with an assist from cinematographer Nicolas Bolduc, whose work here is gorgeous – War Witch has the sort of floating, slowly unfolding narrative reminiscent of Terrence Malick (the preference for voiceover over dialogue is also reminiscent of Malick, though Nguyen is more sparing of the voiceover device). The story contains a great deal of horror and violence but Nguyen doesn’t revel in it, favoring suggestion over graphic depictions of violence. When Komona is forced to kill her parents, for example, the framing is such that we see her shoot but we don’t actually see them being hit, and Komona’s rape by the Commandant occurs off screen (though her revenge, involving a strategically placed avocado seed and a razor, occurs on screen). The film makes no bones about how brutal Komona’s experiences are, but it’s able to strike a tone that is ultimately hopeful. Komona is scarred by her experiences, but she isn’t broken by them and she remains capable of finding joy in life despite her circumstances.

As Komona, Mwanza delivers a wonderful and powerful performance. Komona is a child forced to grow up fast, but she’s still a child, and being able to reflect both the weariness borne of her all too adult experiences, as well as some small remaining facet of her childlike innocence, requires a great deal of skill. In her first ever acting role, Mwanza fully and completely inhabits her character, imbuing her with complexity, and expertly guiding her through the many ups and downs of her short but eventful life. It’s a performance, and a film, that shouldn’t be missed.
Posted by Norma Desmond at 8:00 AM