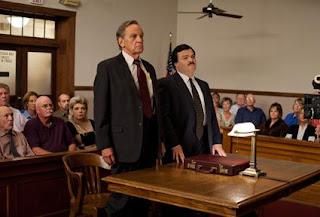 One of the functions of the criminal justice system is to protect the public interest, so what to do when the public decides that a crime is in its best interest? Such is the question raised by Richard Linklater’s Bernie, about a much loved member of a small community who murders the meanest lady in town. Sure he killed her, the townspeople declare, but... It’s the perfect premise for dark comedy, though despite the horrible act at the film’s centre, it doesn’t actually play as all that dark. Like the title character himself (brilliantly played by Jack Black), it’s a film with a sunny disposition – and likeable despite its misdeeds.

Bernie is a mortician in the small Texas town of Carthage, beloved by his neighbors for his kindness and thoughtful nature. Though no one else in town can understand it, Bernie strikes up a friendship with Marjorie Nugent (Shirley MacLaine), recently widowed, largely friendless, and cut off from much of her family due to their history of litigation against her. Although she treats everyone who crosses her path with disdain, if not outright nastiness, she slowly comes to take a liking to Bernie, who becomes her traveling companion and just about everything else. Although their relationship is largely convivial at first, once Marjorie decides to make Bernie the beneficiary of her will, her attitude towards him changes: now she sees him as obligated to her and her demands become more intense, her treatment of him more harsh. Although she begins to run him ragged, he can’t bring himself to say “no” to her – as one of the townspeople states, Bernie was “so willing to keep from hurting other people’s feelings, he just couldn’t tell anybody to piss off.”

Eventually, however, Bernie is pushed as far as he can go and, in a fit of passion, shoots Marjorie four times. Using the fact that Marjorie doesn’t really have any other relationships to his advantage, Bernie hides the body in a freezer and carries on with business as usual, save for one thing: he starts giving away Marjorie’s money, using it to help local people and businesses. Since no one likes Marjorie, no one really misses her – except for her stockbroker, who becomes suspicious of Bernie and, after many attempts, is able to convince the authorities to hold up to scrutiny Bernie’s story that Marjorie has had a stroke and is in a nursing home. The body is found and Bernie confesses, but a strange thing happens on the way to a trial: no one in Carthage wants to see Bernie punished for the crime. This leaves the District Attorney, Danny Buck (Matthew McConaughey), in a bit of a bind as he’s got what should be a slam dunk, no brainer case but a town full of potential jurors who have already decided to acquit.

Bernie takes the form of a narrative fiction-documentary hybrid, interspersing scenes of Bernie’s story unfolding with talking heads from citizens of Carthage (some of whom are played by actors, others by actual citizens of Carthage). One of the reasons why the film works so well is that Linklater obviously takes delight in the people of Carthage and their folksy ways, but not in a way that is patronizing or mocking. He sees the charm in them and uses that charm to set the tone for the entire film, assisted in no small part by Black’s incredibly on point performance. I’ve never really thought much of Black as an actor – as a “performer,” yes, but as an “actor,” no – but he truly rises to the occasion here, delivering a rich and largely sympathetic performance and holding his own against a strong performer such as MacLaine.

Bernie is a largely delightful film but, because it’s based on a true story, it is a little difficult not to be left with a bit of a bad taste when, after all, it’s a film that basically celebrates the death of a real woman. While she may very well have been the meanest woman in the world, she was still a person, you know? That being said, the “reality” of the situation doesn’t really hit you until the end, when Linklater shows images of the real Bernie and Marjorie, so you can enjoy the film while it’s unfolding (and it is incredibly enjoyable) – you’ll just maybe feel a little bit guilty about it at the end.
Posted by Norma Desmond at 8:00 AM