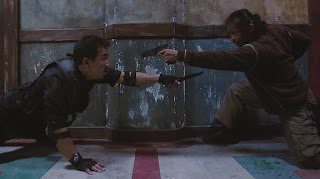 Gareth Evans’ The Raid: Redemption is 101 minutes of intense, bone breaking action. People get shot, stabbed, pummeled to the point where they shouldn’t be able to get up (though they do), tossed over railings, smashed into walls, and blown up. I’m not sure what the final body count is, but it’s impressive. There’s a little bit of a story in there, too, but that’s kind of beside the point. The story exists only insofar as the action requires a little bit of context in order to give you someone to root for in the fight scenes. It doesn’t make for particularly resonant narrative, but it makes for a pretty awesome action picture.

The premise of The Raid has three parts. First, a special police task force has been put together under the leadership of Sgt. Jaka (Joe Taslim) to raid a building that has been a police no-go zone under the control of crime boss Tama Riyadi (Ray Sahetapy) and his right hand men, Mad Dog (Yayan Ruhian) and Andi (Donny Alamsyah). Second, Lieutenant Wahyu (Pierre Gruno), the mastermind behind the raid, has ulterior motives for wanting to carry it out and may not have gone through the proper channels to put it together. Third, Rama (Iko Uwais), a rookie on the team, has a connection to someone inside the building and is determined to get him out alive, and to get out alive himself so that he can return to his pregnant wife.

The team gets into the building but, almost immediately, things begin to go wrong. Kids used by Tama as scouts alert the rest of the residents to the police presence and the building goes into lockdown, with Tama shutting off the power and announcing to the residents (most of whom are criminals) that everyone who helps find and kill the police will be given permanent residence in the building free of rent. A firefight ensues and the team gets pinned down in the stairwell, at which point Jaka learns from Wahyu that backup won’t be coming because no one knows that they’re there. As wave after wave of armed residents comes after them, the team, quickly diminishing in numbers, moves deeper into the building, trying to stay alive and strategize an exit. Meanwhile, Rama is trying to figure out a way to stay in the building and follow through on his personal agenda.

The plot, as I said, isn’t really much of a factor and the film is scant on dialogue, getting almost all of its narrative momentum through its fight scenes of escalating intensity and violence. Fortunately, those scenes are so well crafted that that’s really all you need. It doesn’t matter that there’s no logical way that any human body could take the kind of punishment doled out to several of the characters in the film – I mean, seriously, if a guy can get stabbed in the neck with part of a fluorescent light and get up and keep fighting, then you should probably just stop trying to kill him because you’re clearly just wasting energy – within the world created by The Raid, you just accept it as possible. The stunt choreography (designed by Uwais and Ruhian) is amazing, flawlessly executed and breathtaking in its intensity. As a pure work of action, The Raid is pretty much everything you could possibly ask for.

The Raid is already slated for a sequel, as well as a US remake, neither of which is at all shocking. Because the story is kept so minimal, and the ending open-ended, there is potentially a lot left to do with the characters who remain standing by the closing credits, and the premise itself is easily transplantable to a new setting. The only real question is whether either film can measure up to the level set by this film.
Posted by Norma Desmond at 8:00 AM