Unsung Performances: Gordon Pinsent in Away From Her 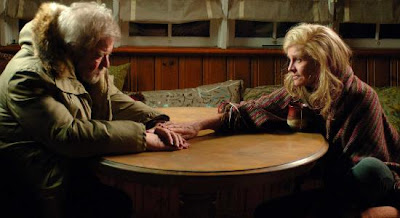 It happens all the time. Two great performances exist side by side in a film, one of which is showy and comes courtesy of an iconic actor, while the other is more grounded and from an actor with a much lower profile. The former is nominated for plenty of awards, and even brings home a few, while the latter is largely overlooked. This was certainly true of Away From Her, which netted Julie Christie plenty of attention but saw Gordon Pinsent left in the cold. Christie is certainly great in this movie but it’s her co-star who does most of the heavy lifting.

Based on a short story by Alice Munro, Away From Her is about a couple dealing with Alzheimer’s. The wife, Fiona, realizes that she’s on the decline and decides to check herself into a nursing home so that she won’t be a burden to her husband, Grant, though he would rather care for her himself for as long as he can. Once Fiona has checked into the home, Grant is not allowed to see her for 30 days, to allow her time to adjust, and once that time has elapsed, he finds that she no longer remembers him. This is devastating to him, of course, and he not only has to deal with the fact that his wife is fading away, but also with a feeling that he’s being visited by karmic retribution for his string of infidelities throughout his marriage. As his wife develops a relationship with another patient in the facility, Grant does the selfless thing and helps facilitate it to ensure her happiness, even if it kills him inside.

For a significant part of the film, Pinsent is called upon simply to react. His character is passive in the decision making process that sends his wife to the nursing home and he can do little but stand by and watch while she’s absorbed into her own mind. Christie gets the big moments and an arc that basically demands that she play two roles: the Fiona who is married to Grant, and the Fiona who doesn’t remember him. Her role requires a lot of external acting, shifts in the way she carries herself and behaves; Pinsent’s role requires a lot of internal acting, a lot of standing back, taking things in and trying to shift gears accordingly. His pain is very real and his desire to allow Fiona some happiness, even if it can’t be with him, is incredibly compelling.

Pinsent’s performance is quiet but it is also very powerful. That moment at the end of the film, where the Fiona he knows briefly returns, is heartbreaking because Pinsent must at once express Grant’s relief but also a degree of caution: Fiona is back for the moment but that won’t last and by the time he releases her from his embrace, she might have forgotten him again. Because Fiona is such an elusive character, it’s Grant who provides us with access to the story, who grounds it and helps provide its shape. It’s a thankless task in many ways, but that never shows in Pinsent’s performance, which is never less than fully invested and fully fleshed out. He won a Genie Award for his trouble, but he should have received a lot more attention.
Posted by Norma Desmond at 8:00 AM

I hope more people will check out this film.